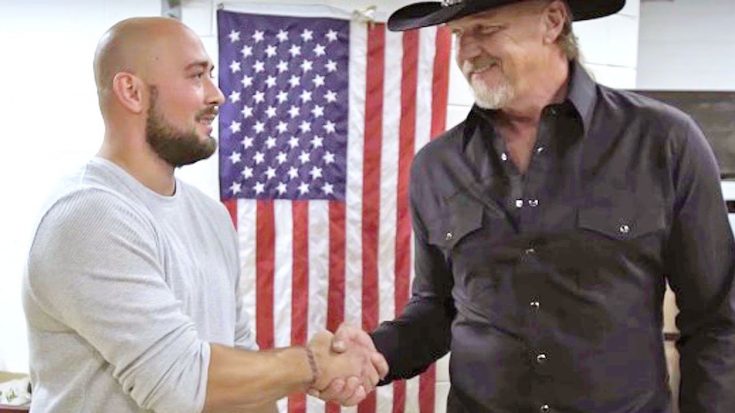 Way back in March, Trace Adkins debuted a new song off of his latest album, Something’s Going On. Titled “Still a Soldier,” the song joins a list of several other tracks Adkins has recorded over the course of his career as a way of honoring servicemen and women.

When it comes to “Still a Soldier,” the song places the emphasis on the lives of military veterans. The focus is placed on a solider who has completed his service and has now resumed life as a civilian. He goes to work, attends church, drinks beer with his friends, and enjoys time with his family just like any other working man would do. But in the back of his mind he is always thinking of the life he left behind as a member of the military. Because of this, he knows he will always feel like a soldier.

The first visual representation of the song came in the form of its lyric video, which was also released in March. But after that, little was said about “Still a Soldier” until September, which is when Adkins finally released it as a single. Adkins spoke about his decision to release the song in a press release:

“We recorded this song well over a year ago, and my intent was always to release it as a tip of my hat to those who have served. For those who have crawled off the battlefield but still stand for the anthem … this is for you.”

Since then, Adkins has been performing “Still a Soldier” on every stage he graces, including the Grand Ole Opry. Now, the song can gain further traction thanks to the release of its official full-length music video, which debuted on CMT this week.

The music video follows the life of Army Specialist Bryan Gerwitz as he goes about his everyday tasks. We see him heading off to work, playing catch with his son, and spending some time with his wife in the kitchen. But in the midst of all of that, he also takes time to pause and watch the news to learn more about what’s currently going on in the military. It goes to show that even though he is now a civilian, he still feels a strong attachment to the military.

While the main part of the video is certainly touching, the ending is the best. Gerwitz’s wife ends up presenting him with a pair of tickets to one of Adkins’ shows, and they go together. While there, Gerwitz gets the chance to meet and speak with Adkins, and is later introduced to the crowd along with two other veterans.

The moment that the three veterans line up next to each other is one of the most touching things we’ve ever seen in one of Adkins’ music videos. You can tell the weight of the moment got to Gerwitz and his wife, who both appeared with tears in their eyes as the crowd applauded and cheered like wild. It’s a moment that will leave you struggling to hold back tears of your own.

Go ahead and check out Adkins’ profound music video for “Still a Soldier” below. We’d like to issue a huge “thank you” to Gerwitz and all of our veterans for their service to our country.