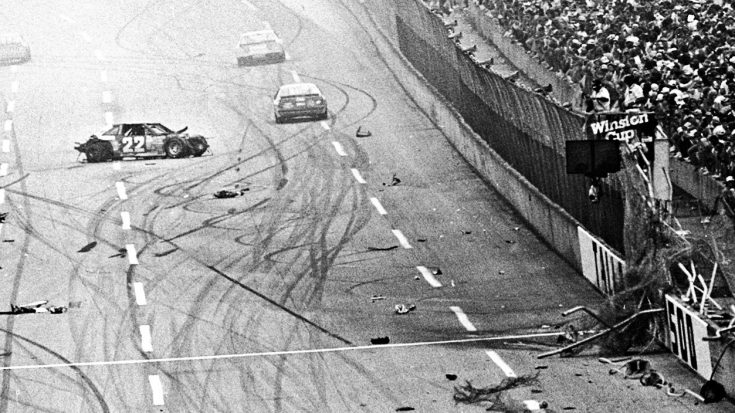 With a history spanning more than seven decades, there was bound to be some bizarre and freaky things to happen in NASCAR, but nobody knew how many would revolve around just one specific track.

Talladega Superspeedway was the product of a dream that Bill France Sr. had back in the 1960s. He wanted to create a track that was meant for faster speeds and held a longer length than Daytona International Speedway, but ran into some regulatory bumps trying to build one in Orange County, North Carolina. Eventually, France found a home for his dream at an old airfield along Interstate 20 in Alabama.

Unbeknownst to France, local folklore held the belief that Native Americans once used the land and still retained a presence in the area after being driven out. The reason for the former tribe being driven out varies based on who you ask, but all will tell you that a devious curse remains on the land that the track sits on top of.

In the almost 50 years since it was opened, a series of bizarre and inexplicable occurrences have happened at the track – some of them being fatal.

In 1973, driver Larry Smith died of head injuries in a single-car crash, but the reports stated that the crash wasn’t anywhere severe enough to prove fatal. Later in that same race, driver Bobby Isaac exited his vehicle and quit racing on the spot. His reasoning behind the random choice to quit was because a voice told him to quit.

Just the following year, twelve top racing cars were sabotaged the night before the race. Tires were slashed, brake lines cut, and sand was poured into the gas tanks. No one was ever charged in connection with the crime and one driver called it “attempted mass murder.”

A 1986 race was significantly delayed after the pace car was stolen and driven furiously around the track by a gatecrasher for two full laps until authorities were able to apprehend him.

Many other strange and unusual happenings and untimely deaths have occurred at Talladega Superspeedway, all seemingly continuing the legend of it being cursed.

Watch the television featurette below that discusses some of the most bizarre incidents about the legendary track and let us know if you believe in the curse.