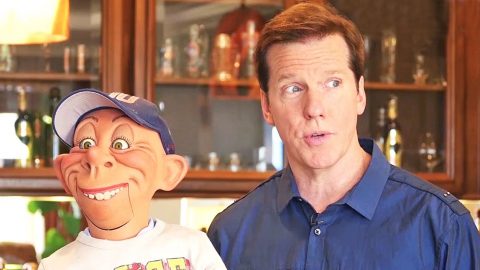 There’s no ignoring Jeff Dunham‘s comedic talent. For years, he’s been making us laugh with his downright hysterical acts, which feature his unique cast of puppets. Achmed, Peanut, and Walter are just a few of Dunham’s most popular characters. But our personal favorite has to be Bubba J.

If you were to look up the defintion of “redneck” in the dictionary, you’d see Bubba J’s picture next to it. He’s as redneck as it gets, with a full-on beer belly and an intense passion for NASCAR. Dunham plays off of other traditional redneck stereotypes in his acts with Bubba J, and has managed to build his character on them.

Since Bubba J isn’t exactly the sharpest tool in the shed, his confusion over simple topics results in some hilarious moments. For example, Bubba J didn’t understand the concept of New Year’s resolutions, so he ended up saying that he would stop drinking “all alcohol.” Once he realized his mistake, Bubba J frantically tried to take back his resolution. He eventually declared that he would quit smoking instead. “And since I don’t smoke, I’m good!” he said.

While it seems like Dunham and Bubba J managed to pull of that New Year’s resolution video without a hitch, you have to keep in mind that we’re seeing the finished product. A lot of work goes into making Dunham’s videos, and mistakes and goofs are inevitable. He proved this with a video he shared in April 2016, which shows a series of comical bloopers starring Bubba J.

Dunham wanted to film some short clips to announce his tour dates, and had Bubba J join him for the process. But Dunham kept stumbling over the name of one venue and mixed up several of the tour dates. His mistakes were funny enough, but they became even more so once he actually started yelling at himself through Bubba J!

One time Dunham was a bit too slow to say his line, and Bubba J was quick to correct him. “Too late,” Bubba J said.  “I know, we got it backwards,” Dunham replied, to which Bubba J responded with, “Do it again.”

The moment that had us crackin’ up the most came near the end of the video, when Bubba J was trying to describe where their fans could find them at one of their shows.

“We’ll be on stage between the deep fried butter stand and the medical tent,” Bubba J said, before he started spitting out a bunch of jumbled up words. He decided to cover for Dunham, saying, “that was me, not him!”

Oh man, just when we thought that Dunham and Bubba J couldn’t make us laugh any harder. Tune in below to check out their blooper reel, and prepare to laugh your head of!