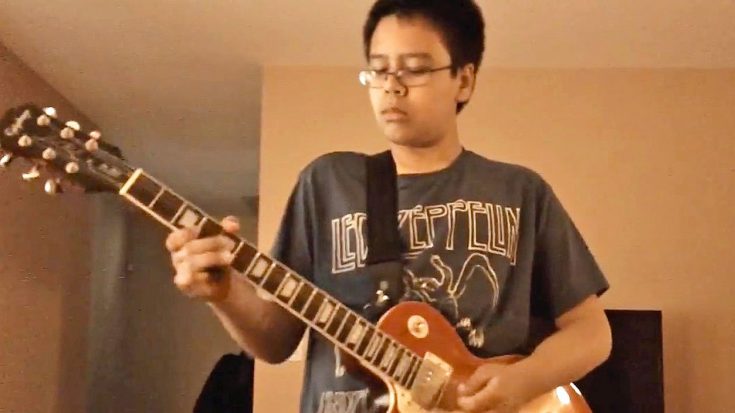 Few bands have the same staying power as Lynyrd Skynyrd. Their songs have transcended genres and generations, which has kept their fan base strong.

Those who grew up listening to Skynyrd’s music have passed their love for it on to their own children. Today, there’s a whole bunch of young Skynyrd fans out there who appreciate their classic hits such as “Gimme Three Steps” and “Sweet Home Alabama.”

Of course, any Skynyrd fan, young or old, knows all about the band’s iconic anthem “Free Bird.” Those who are deeply dedicated to the band devote themselves to learning some aspect of the song, whether it be the vocals or the instrumentals.

Arguably, the most recognizable part of “Free Bird” is its closing series of guitar solos. It is also perhaps the most difficult part of the song to learn. But one 13-year-old Skynyrd fan made it look like a cake walk when he filmed himself covering the song in 2015.

This kid made it clear from the start of the video that he knew exactly what he was doing. He powered through some of the quickest parts of the closing solo with effortless ease, leaving us in awe. How in the world did he move his fingers so fast?

We’re sure that the Skynyrd guitarists would be mighty proud. For a 13-year-old kid, his rendition is quite impressive! Who knows, we may see him jammin’ out on stage with the next big rock band some day.

If you love watching young Skynyrd fans show off their musical skills, then this video is for you. Go ahead and check it out below.