This Country Music Leading Lady Just Got A New Tattoo 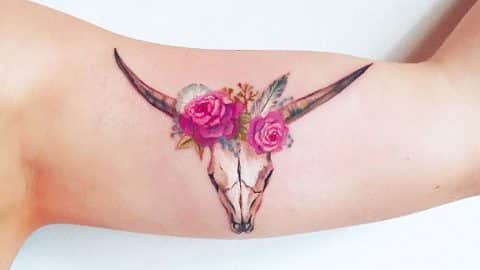 Her single has been so successful, even a cappella group Home Free covered it!

Maren Morris has been having an incredible year with the release of her hit singles “My Church” and “80s Mercedes”.

The two singles were followed up by her debut album with Columbia Nashville titled Hero. She has been called a mix of “Amy Winehouse, Little Big Town, and pulp fiction”.

Rolling Stone Magazine even called “My Church” one of the 30 best songs of the first half of 2016, and we’re sure it’ll be on their list at the end of the year as well.

Her talent has been recognized by everyone in the country music world, which is why she’s opening for Keith Urban on his RipCORD World Tour.

Morris had some down time recently, so she decided to get a tattoo by an artist she’s been following for six years.

She recently shared a video of herself getting a new tattoo, and we’ve been dying to know what it is! She revealed the art, and it’s absolutely gorgeous!

Take a look at the tattoo below and let us know what you think!

A better look at the new paint!

Watch her deliver an unplugged performance of “My Church” below.