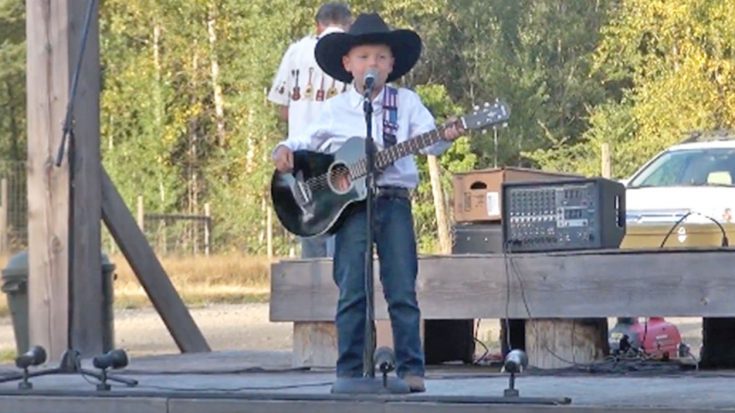 Wearing a black cowboy hat, white button up shirt, starched blue jeans and cowboy boots, this little George Strait fan put on quite a show for his friends and family.

Young Cody, who looks like he couldn’t be older than six years old, performed Strait’s hit song “Check Yes Or No” while holding a black guitar, much like country singer does himself when he’s not strumming during a song.

This isn’t Cody’s first time singing one of The King Of Country’s biggest hits. When he was just three and four years old, his YouTube video of him singing  “Troubadour”, “I Can Still Make Cheyenne”, and “Check Yes Or No” gained some traction.

Not too long after, he was opening for a local band for upwards to 100 people. His set included nine of Strait’s songs including “You Can Do Anything Else”, “You’ll Be There”, and “So Much Like My Dad”.

He’s come a long way since those videos and no longer seems nervous to perform for a crowd! You can tell just how much he loves performing country music and how much he looks up to George Strait.

According to his mom, Shannan, “His dream is to meet the King of Country and to be a singer like George Strait.”