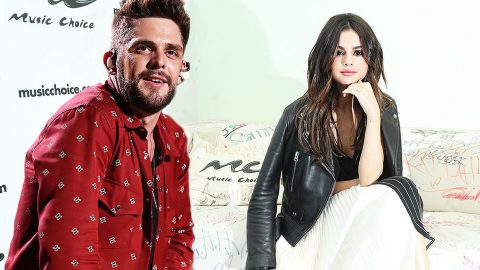 The speculation was finally addressed by country star Thomas Rhett during an interview that had fans grinning with excitement! Sitting down with Rare Country, the “Die A Happy Man” singer shed some truth on a pop star duet that had fans eager for answers.

The grapevine was buzzing as word of a crossover collaboration between Rhett and pop superstar Selena Gomez surfaced. Despite the wait, the country singer finally addressed the prospective track, admitting, “It’s possible.”

“Anytime the country world melts into the pop world, it’s an interesting conversation. A lot of things need to go correct for it to work out. But yes, Selena did sing a song of mine. It’s still sort of up in the air if it’s going to actually make the record,” he revealed. Rhett admitted that the two have yet to meet in person, but were given the opportunity to discuss their work over the phone.

“…I was blown away [by] just how super nice and respectful [she was,] because I was terrified to talk to her, especially about the song,” Rhett said, praising the singer for her kind heart and admitting his eagerness to personally meet her in the future.

While any information on the song itself has been on the hush, you can bet your bottom dollar that fans are elated for the hopeful duet! Rhett is currently on an international tour until the end of this year, in addition to recently adopting a beautiful baby girl while anticipating the birth of his first biological child.

You can listen to the singer’s recent collaboration, “Craving You”, with fellow country star Maren Morris below.