By Jennifer Pernicano on November 11, 2016
Advertisement 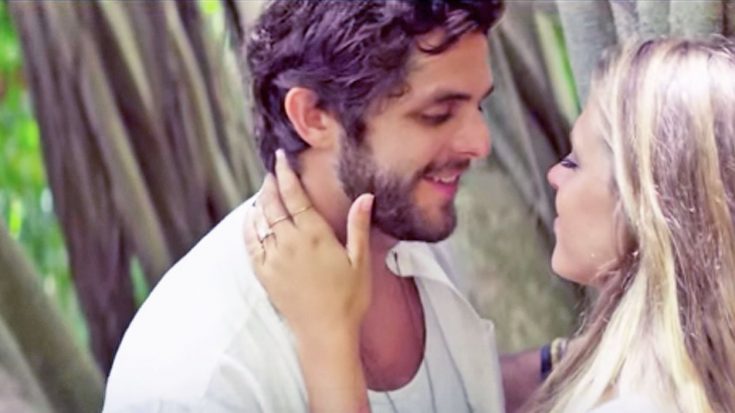 With lyrics like, “If all I got is your hand in my hand, Baby, I could die a happy man,” there’s no surprise that Thomas Rhett won award after award for his song “Die A Happy Man.”

His second single from his second album, Tangled Up, Rhett wrote the song with two other writers, but it is dedicated to his wife, Lauren.

The video shows them on a tropical vacation and him singing about how all he needs in life is her love. He doesn’t need to see the Northern Lights, or the Eiffel Tower lit up at night. All he needs is her.

The single is certified 6x Platinum and spent 17 weeks in the number one spot on the Billboard charts, something that hasn’t been done since 2008.

Although Rhett sings that he doesn’t need to see the Eiffel Tower at night, he took it upon himself to take his wife there after the song came out and document it on Instagram.

“Boom,” he wrote as the caption, sweetly kissing his bride on the cheek in front of the lit up French monument.

Fans have loved watching Thomas and Lauren’s love story play out as they welcomed two daughters last year, one through adoption and one biologically. They are now doting parents to Willa Gray and Ada James, with another daughter on the way.

We decided we didn’t have enough princess dresses around the house so we’re adding another Akins baby girl to the family early next year ?????? despite Thomas Rhett’s initial shock (swipe to see video ?) we are absolutely over the moon for our baby girl! Our girls cannot wait to meet their little sister ?? Willa Gray prays for her every night (heart in a puddle every time??) & she and Ada James love to touch my belly and talk to her?????-especially bc I’ve been showing since I was SEVEN weeks (?). So it feels like we have been hiding this secret for an ETERNITY. And I’d like to apologize to everyone I’ve canceled on, said no to or just been MIA, but for a second there I wasn’t sure if I was pregnant or just puked for a living?. But she’s soooo worth it????? We are SO excited! & if you need TR you can find him in the camping section at REI buying dude things…….jk, he’s excited too ?

Watch the swoon-worthy video below.