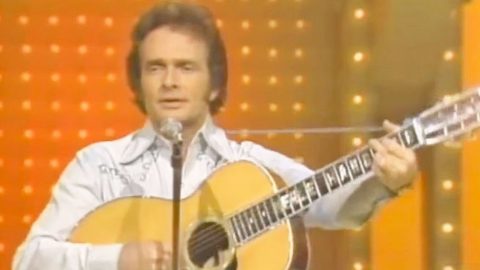 It would be a quite a challenge to name the greatest Merle Haggard song. Over the course of his career, “The Hag” wrote and recorded so many songs that could rightfully fall under the “greatest” label.

Since it’s so hard to pick a favorite song of Haggard’s, we bet you’d appreciate hearing a medley of his tunes. Well you’re in luck, because we have a medley performance here for you that you absolutely don’t want to miss.

Haggard was one of country music’s leading stars by the time he appeared on Pop! Goes the Country in 1974. He already had over a dozen number one hits to his name, and decided to play four of them during his performance on the popular variety show.

Rather than play all four songs individually, Haggard packed them all into a medley that lasted just a little over three minutes. He opened with his touching tune “If We Make it Through December,” then seamlessly moved into his next hit, “Old Man from the Mountain.”

After that, Haggard sang “Everybody’s Had the Blues” before he concluded with “Okie from Muskogee.” The audience went wild as soon as they heard Haggard sing the first few words from the song, which was one of his biggest hits up to that point.

Haggard poured an overwhelming amount of energy into “Okie from Muskogee,” ending his performance with a bang. He even threw a little bit of a yodel into the last line of the song, which surely impressed all who watched him that day.

Go ahead and tune in below to catch Haggard’s entertaining medley of hits. It may be short, but it gives you a nice taste of four of his best songs!

Which one of the songs featured in the medley is your favorite? Once again, we find it too hard to choose!