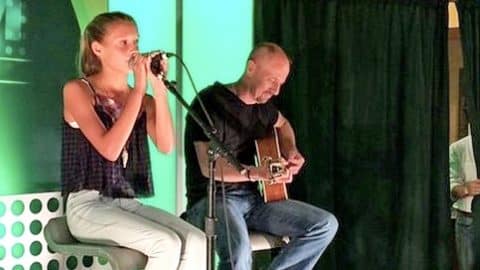 Hitmaker couple Tim McGraw and Faith Hill have been married since 1996 and have welcomed three immensely talented daughters into the world. The youngest, Audrey, has taken great strides to grow her passion for music – including performing at one of her dad’s concerts!

During a show on his Sundown Heaven Town Tour, Audrey took the stage in a VIP tent giving concert-goers a special rendition of the Dixie Chicks’ supersonic hit “Travelin’ Soldier” that sent tingles down their spines!

The song was first released in 2002 as the third single from the Dixie Chicks’ album, Home and immediately soared to the No. 1 chart position.

A proud dad watching his daughter #Audrey sing for the fans.That's Tim by d side btw @TheTimMcGraw #SundownHeavenTown pic.twitter.com/GsWhhZfHh9

“Travelin’ Soldier” tells a tale of a lonesome American soldier who talks to a waitress while waiting for an Army bus and later begins corresponding with her through his service in the Vietnam War. The two become close and develop a strong bond when suddenly he reveals that he won’t be able to write for a while because “it’s gettin’ kinda rough”. Later at a high school football game, she hears his name read as part of the locals who had died serving in Vietnam and she breaks down mourning him as the only townsperson to do so.

When it comes to Christmas, the McGraw family wants things how they've always been. Deets: https://t.co/ETNSZy8SGD @FaithHill @TheTimMcGraw pic.twitter.com/Vr8yN8WWmR

The 14-year-old daughter of country royalty has a natural stage presence that rivals that of industry veterans and vocal talent that clearly shows she’s the product of a thriving musical family.

Watch this stunning performance from young Audrey in the video below and prepare to see her on the country charts in the future!