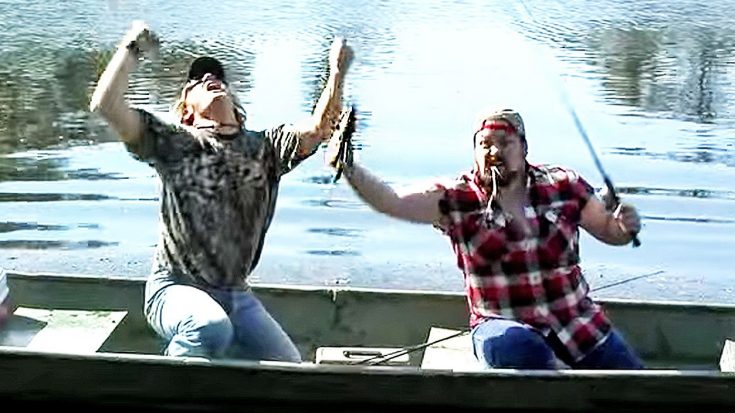 While we absolutely love parody songs, this has got to be one of the greatest versions ever recorded – and y’all are sure to be howling with laughter!

Christian comedian Tim Hawkins isn’t one to shy from a good tune, as he incorporates music and instruments into nearly all of his comedy routines. This man sure has one massive funny bone, as he spun one of country superstar Carrie Underwood‘s biggest hits into a side-splitting parody linked to fishing with his best buddy!

Re-titled “Cletus Take The Reel,” Hawkins and his pal sport the typical redneck attire as they roll toward the fishin’ hole on a four-wheeler! The video cuts into a variety of dramatic frames with Hawkins narrating the fateful day that he and his buddy Cletus had an adventure of a lifetime!

Hawkins begins to recall the event in great detail as he sings, “I was fishing last Friday on a lake in Mississippi in the humid summer heat on a boat with my best friend Cletus who was sleeping in the back seat,” perfectly matching Underwood’s original “Jesus Take The Wheel” tune.

He explains a sudden twist in the story that happened while snagging a monster-sized bass. Sadly, he pulled a muscle in his upper thigh while trying to reel this fish in and was forced to rely on Cletus for backup.

The dramatic video continues on, garnering endless laughter from everyone who watches it – and we can’t get enough of it!

Check out Tim Hawkins’ hysterical “Cletus Take The Reel” parody below and tell us your favorite part in the comments.