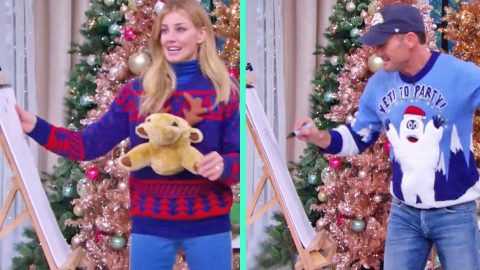 Normally, Faith Hill is behind the scenes of the brand-new talk show, Pickler & Ben. Kellie Pickler and Ben Aaron serve as the hosts, while Hill is an executive producer.

But Hill finally stepped in front of the camera on November 20, and her husband Tim McGraw was there with her. The two were the celebrity guests for that episode, and hung out with Pickler and Aaron for the entire one-hour show.

Since Christmas is coming up, it was basically a given that the four of them would take part in some Christmas-related game. On a previous episode, Pickler and Aaron teamed up with country legend Reba McEntire for an awkward game of Christmas charades.

But when it came time for Hill and McGraw to appear on the show, they decided to go for a different game. The game that the quartet ended up playing was a special holiday-themed version of pictionary. The ladies formed one team, while the men made up the other. Hill got up to draw first, and was given the task of drawing the Grinch.

As she started to draw out the grumpy green character, it became obvious real fast how terrible Hill is at drawing. Yet somehow, Pickler managed to guess the drawing without much struggle, which surprised McGraw and Aaron. They thought it looked more like a yeti!

McGraw soon proved that he had no room to talk, because when he jumped up to draw he did equally as bad. He was supposed to draw egg nog, and went about doing so by drawing what looked like a cracked egg and a giant circle.

His horrible drawings left Aaron a bit more confused than Pickler had been with Hill. But remarkably, Aaron eventually managed to guess what McGraw’s drawing meant!

We guess it’s a good thing that Hill and McGraw are singers, not artists! You can see just how questionable their drawings were by tuning in to the clip below. Would you have been able to guess them?