Tim McGraw Gushes About His Daughters, And It’s The Sweetest Thing You’ll Read All Day 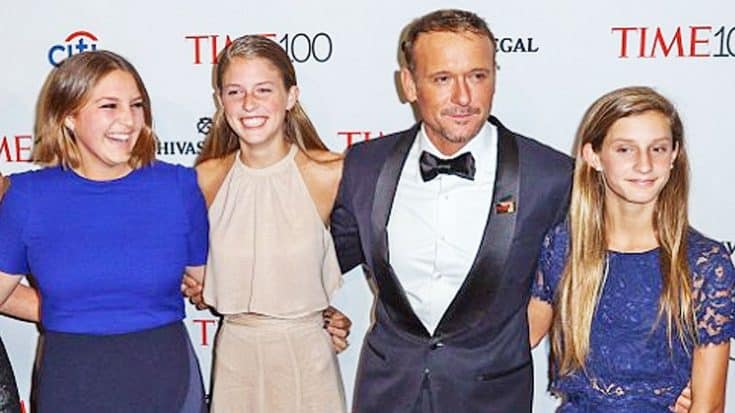 With Father’s Day approaching, many of country music’s dads are looking forward to spending the day with their children. But while Father’s Day is all about dads, Tim McGraw has been celebrating the accomplishments of his three beautiful daughters.

Tim and his wife, fellow country star Faith Hill, are the parents to three girls named Gracie, Maggie, and Audrey. This year, all three of the couple’s girls celebrated huge milestones in their lives. Gracie finished her freshman year of college, Maggie graduated high school, and Audrey finished junior high.

During an interview on the AJ & Ashley radio show, Tim showed that he’s a proud papa as he gushed about his daughters and the young women they’ve become.

Tim says there’s one role model in his daughters’ lives he feels is mainly responsible for helping them become the young women they are today. “If you have three daughters, you couldn’t have a better role model than their mom,” he said, referring to Faith.

When it comes to his music, Tim also manages to incorporate his love for his daughters into that as well. Although he did not write his latest single “Humble and Kind”, Tim was inspired by its message, and he thought about his daughters while he recorded it. At the time, Gracie was preparing to leave for college, and Tim was unable to get through a take of the song without crying.

Now, “Humble and Kind” is one of the biggest country hits of the year so far, and has inspired countless people around the world. You can watch the song’s official music video below, which won the CMT Music Award for Video of the Year.

We love it when Tim talks about his daughters, because he always says the sweetest things about them!