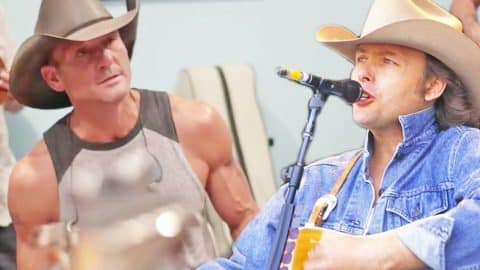 Tim McGraw is known for jamming out backstage with his band before shows in sessions called “Backstage with McGraw.” The country singer posted a “throw back” video to his Facebook of one of his jam sessions to the tune of Dwight Yoakam’s classic “I Sang Dixie.”

McGraw sits idle in a chair during his rendition of the song and stays true to the slow tone and tempo of the original. The camera pans around the entire room filled with McGraw’s sizable band as each member plays their own instrument.

“I Sang Dixie” was released by Yoakam in 1988 as the second single from his album Buenas Noches from a Lonely Room adding another No.1 hit country single to his list.

The song tells the story of a southern man meeting a stranger dying in the streets of Los Angeles. The southern man stops to hold the man as others simply “walk on by” and sings “Dixie” to comfort him in his final moments. The man uses his final breath to advise the narrator to “run back home to that southern land” ﻿as to avoid succumbing to his same fate.

Watch McGraw’s rendition of Yoakam’s classic in the video below.