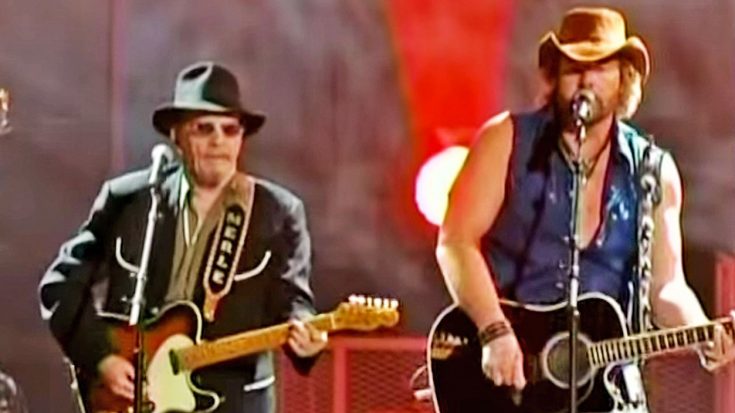 Country singer Toby Keith joined Merle Haggard for an explosive performance of one of Haggard’s most iconic songs, “The Fightin’ Side of Me.”

45 years ago Merle Haggard was at #1 on the Country chart with 'The Fightin' Side of Me.' #MusicIsLife #AndTheHag pic.twitter.com/cMT1WOKmOR

“The Fightin’ Side of Me” was released over four decades ago and is still covered often to this day, achieving a status of timelessness. The song reached No.1 on Billboard’s Hot Country Singles and received two CMA Award nominations for both song and single of the year.

Toby Keith has made his name in country music as cowboys and patriotic people have come to love his music. Keith and Haggard delivered a high-octane performance of the song that absolutely electrified the audience. The audience went wild when the two country singers took the stage, and from the looks of it, they didn’t disappoint.

The performance was a part of the CMT Outlaws special from 2005, also featuring Lynyrd Skynyrd, Gretchen Wilson, Kid Rock, and many more. CMT Outlaws was created in celebration of the true rebels of country music, both in modern country and classic.