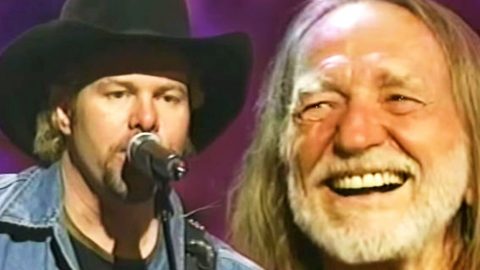 Country music legend Willie Nelson has been the “bud” of every pot joke amongst his fellow stars, seeing that the icon has been a proud and public advocate of blazin’ up for quite some time. This comes as no surprise seeing that Nelson owns his own marijuana company and has quite the repertoire of tour bus smoking stories that could make anyone blush!

Country music singers Toby Keith and Scott Emerick took it upon themselves to honor the legend with an original song that purely captures his essence and hysterical track record! Titled “Weed With Willie”, the singers explain a rocky start of optimism as they sing,

“I always heard that his herb was top shelf/ I just could not wait to find out for myself/ Don’t knock it ’til you tried it, well, I tried it my friend/ And I’ll never smoke weed with Willie again.”

Posted by All Things The Highwaymen on Friday, February 27, 2015

Standing behind the performers, Nelson is all smiles and laughs as the two men explain that their nights were cut short due to Willie’s incredibly strong pot that clearly took them by a sudden surprise! Although they plea with the crowd that they are adamant about keeping their distance from Nelson and his more than magical weed, they coyly sing,

“In the fetal position with drool on my chin/ I messed up and smoked weed with Willie again.”

These guys are absolutely hilarious! Check out the original song below!