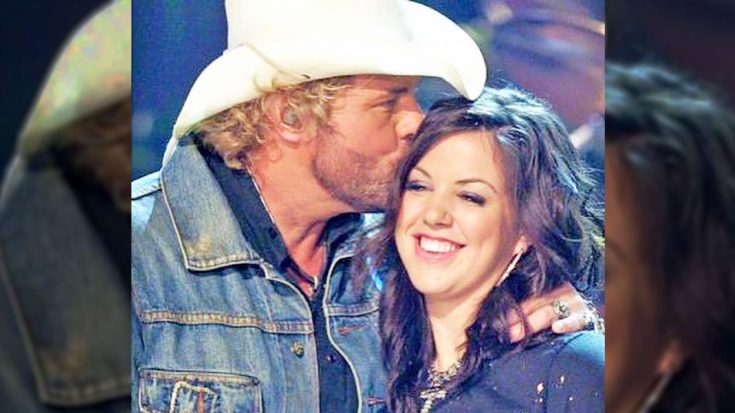 A few years ago, a singer named Krystal Keith went viral after releasing a song called “Daddy Dance With Me,” something she wrote specifically to share with her father on her wedding day.

Her father just so happens to be country singer Toby Keith.

He's pretty great at the dad thing. Definitely the coolest one I've ever had ?? Love you Dad. Thanks for being my hero. #HappyFathersDay

She released “Daddy Dance With Me” on her debut album Whiskey and Lace in 2013, but country fans heard of her many years before that. In 2004, she sang a duet with her dad that was on his Greatest Hits 2 album, a cover of Inez and Charlie Foxx’s “Mockingbird.”

Krystal took some time off after having her first child, a daughter named Hensley.

Pool day with my girl #FridayFeels

In what looks to be Krystal’s return to country music, she and Lance Carpenter, the songwriter responsible for Kelsea Ballerini’s 2015 hit “Love Me Like You Mean It,” have teamed up for a gorgeous new duet. Titled “Anyone Else,” Krystal’s soprano harmonies sound incredible with Scott’s voice.

“I had been writing with Krystal and asked her if she’d put a vocal on it so I could see what it sounded like as a duet. Her folks flipped out over it. I loved it,” Carpenter said in a news release, according to News OK.

She shines brightly in her solo verse of the song, and it will likely get stuck in your head after playing it on repeat. Both singers are signed to Show Dog Nashville and will be releasing an accompanying music video to “Anyone Else.” Take a listen to their duet below.