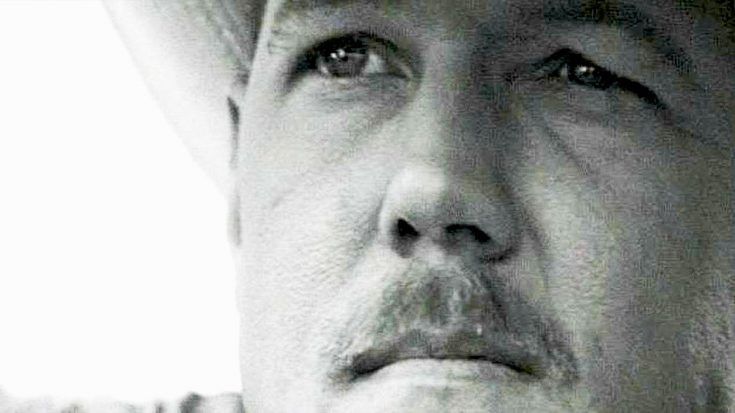 If you’ve been a Trace Adkins fan since the beginning, there’s one song that immediately comes to mind, and that’s his first Top 5 hit single, “Every Light in the House”.

The memorable and catchy ballad was written by Kent Robbins and recorded by Adkins. It was released in August 1996 off of Adkins’ debut album, Dreamin’ Out Loud and later peaked at #3 on the Hot Country Singles & Tracks chart.

“Every Light in the House” tells the story of a heartbroken man leaving every light on in his house just in case his former lover decides to return home:

“The backyard’s bright as the crack of dawn. The front walk looks like runway lights. It’s kind of like noon in the dead of night.“

Rick Cohoon from AllMusic says the mid-tempo tune “is a creative approach to the age-old good-bye I miss you song.” We agree when Cohoon goes on to say that Adkins “communicates pain so well with his deep baritone.”

The official music video starts off with Adkins sitting on his front porch with his dog. He heart-wrenchingly states, “It’s just me and you now boy,” as the music starts. The black and white video shows Adkins’ character working endlessly around his yard and at his job, trying to keep himself busy as the woman who left him behind does the same, except in the big city with her modeling career.

Fortunately, at the very end of the video, the woman runs back into his arms and the bright lights dissipate into the night. In this case, the sad tale got a happy ending.

Throw it back with some classic Adkins by checking out his music video for “Every Light in the House” below.