Trace Adkins Finally Reveals What Would Make Him Cut His Hair 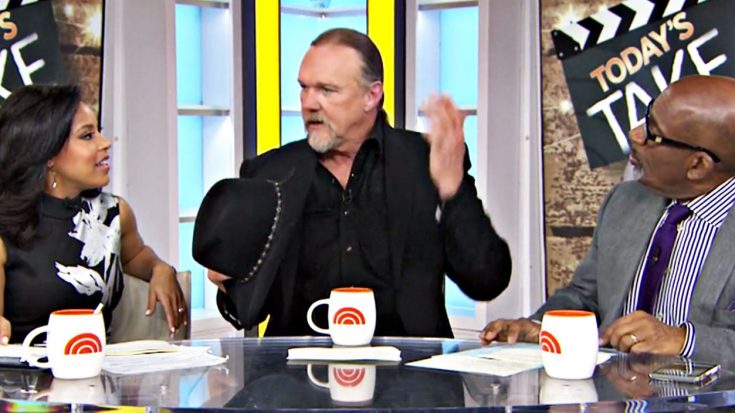 For years, even decades, this country music superstar and on-screen heartthrob has maintained his image in a very similar fashion – and it all revolves around his luscious locks of hair!

While many people have made claims that Trace Adkins has never once cut his hair in more than two decades, the longtime musician and world-renowned baritone set the record straight during a recent interview – and revealed what would actually make him cut it all off!

Speaking to the Today Show in February 2017, Adkins sat down with the hosts for a fun-filled Q&A session that fielded more than a couple interesting talking points about his lengthy hair.

“So Trace, we did a little bit of research on you and we wanted to ask you about some amazing things we learned,” host Sheinelle Jones said. “You haven’t cut your hair since 1991 – true or false?”

Through all the rumors that he hasn’t cut his hair in that expansive amount of time, Trace revealed that the answer was actually false!

“Not true!” Trace explained. “Because every time I do a video somebody trims it up a little bit – it’s not like cut it, it’s just [trimming the ends].”

The hair talks didn’t end there, and with such long locks of hair that he’s had for the better part of 30 years, Trace admitted that he would definitely cut it – if the circumstances were right!

“I haven’t really cut it short, but I would!” Trace added to the complete surprise of the hosts. “If there was a movie roll with enough zeros on it, I’d cut my hair.”

Jones then added “Cheers to the zeros!” and toasted the country star in a moment that had all three of them laughing!

Check out his full interview in the video below and let us know what you think in the comments.

WATCH: Has Trace Adkins not cut his hair since 1991? Is he afraid of snakes? We quizzed the country star and got the real scoop!