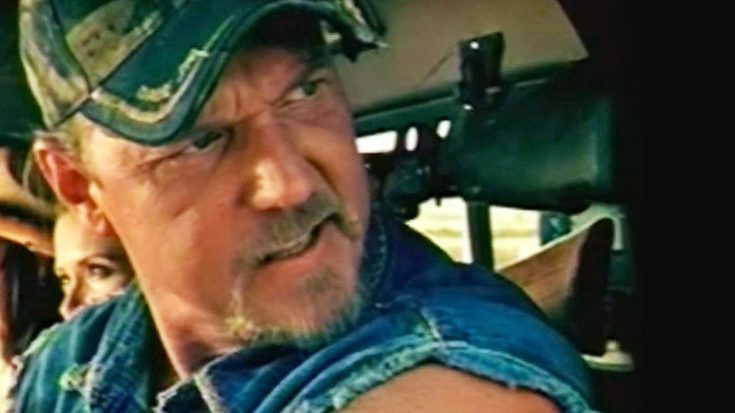 Perhaps no song captures Trace Adkins‘ larger-than-life personality more than his 2004 single, “Rough & Ready.” Although the song was not a Top 10 hit on the country charts, it has maintained a long-lasting level of popularity that led to it being certified Gold by the RIAA.

The song is the ultimate country boy anthem, as Adkins proclaims his love for cold beer, hot wings, and Wrangler jeans. He also expresses his dislike of fancy clothes, saying he only owns one blue suit and it doesn’t even fit.

As you could expect, the music video for the song captures its rowdy nature, and in fact it goes above and beyond. The video shows Adkins driving around in an old pickup truck and hanging out with a pretty country girl. On his drives, Adkins encounters a rich couple from the city, and the wife seems intrigued by his bad boy persona.

After the couple’s fancy car breaks down, Adkins drives by and offers to give them a lift, but the husband has to sit in the back with his dog while the wife climbs in the truck with Adkins. Needless to say, the husband was mortified. Just goes to show that country boys know what they’re doing!

Another one of Adkins’ high-energy songs is his latest single, “Lit.” Yet another country anthem, “Lit” celebrates all the things in life that give a person that feel good kind of feeling. I mean, who wouldn’t get a thrill out of fishing with dynamite?

“Lit” doesn’t have an official music video yet, but when it does we’re sure it will be just as fun as the one for “Rough & Ready.” You can watch that video below, along with one the lyric video for “Lit.” If you love the song, be sure to head over to iTunes and download it here!