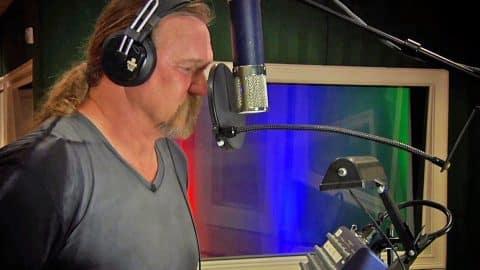 In 2012, Trace Adkins teamed up with some of country music’s greatest for a good cause. T. Graham Brown, Jimmy Fortune, and Marty Raybon all joined Adkins for a one-of-a-kind collaboration on the gospel classic “I’m Working On a Building.” The video that the quartet shot for the song was used to help raise awareness for International Cooperating Ministries, or ICM.

ICM is a non-profit foundation that has helped build thousands of churches, orphanages, and schools around the world. So it only seems fitting that the song Adkins and the other country greats sang to help benefit the organization was “I’m Working on a Building.”

Award-winning director Stan Moore directed the music video, which jumps between clips of the four artists singing in a studio and time-lapse footage of a church being built. Adkins makes his first appearance a bit later in the song than everyone else, but once he does there’s no mistaking his baritone voice.

The amount of passion and soul these four gentlemen put into their performances is extraordinary. Don’t be surprised when you watch them sing in the clip below if you start shouting “hallelujah” or “amen”!