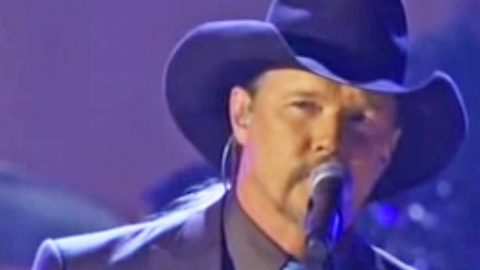 Over the years Trace Adkins has performed many of his lively, fun-loving hits on the country music award shows, but he’s performed some of his more emotional tunes as well. One song that always seems to leave a lasting impact on the audience is “You’re Gonna Miss This,” which was a number one hit for Adkins in 2008.

“You’re Gonna Miss This” registered strongly with listeners, and not just country music fans. That’s because its message is one that we all can and should relate to. Don’t wish time away as you look toward the future, but rather focus on the present because one day you’ll miss those times.

Adkins brought “You’re Gonna Miss This” to the stage at the ACM Awards in 2008, which occurred just a few months after he released the song as a single. He ended up delivering a profound performance of it, one that was filled with even more emotion than the recorded version we all know and love.

It’s clear from watching Adkins during this performance that his whole heart was in each word he sang. Adkins always dedicates himself to his performances, but there’s something about this one in particular that seems to carry an almost magical quality. See for yourself in the video below.

Adkin’s latest single, “Lit,” may not be as emotional as “You’re Gonna Miss This,” but it is also about moments in life that you will never forget, such as your grandpa fishing with dynamite. Sound interesting? Well if you haven’t heard the song yet, you can watch Adkins perform it on Fox & Friends in the video below. If you like what you hear, head on over to iTunes here to download the song!