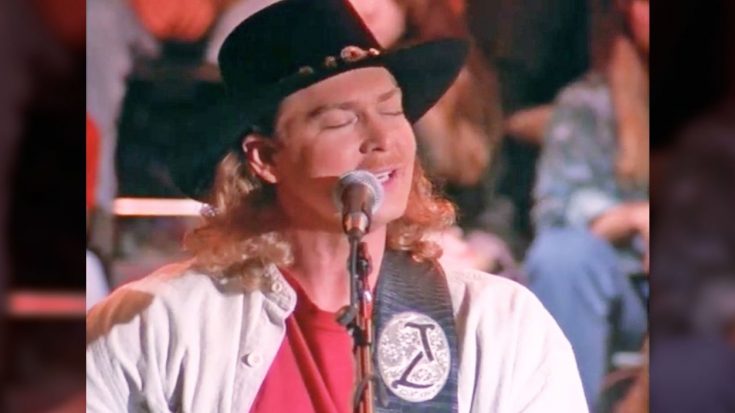 By 1996, Tracy Lawrence already had six songs hit number one on the Billboard country charts. That year, he released his fourth album, Time Marches On, which included his biggest chart hit at the time.

The song “Time Marches On” went on to receive Single of the Year and Song of the Year nominations from the Country Music Association. It also became his longest-lasting number one single, staying at the top of the charts for three weeks.

“Time Marches On” tells the story of a married couple and their two children, starting when the kids were just babies. The song follows the children as they grow into adults.

The sister goes from being a child and crying out from her bed, to using makeup and face wash, to finally calling herself a “sexy grandma.”

Brother goes from wearing feathers on his head, to smoking dope, to being on a diet for high cholesterol. The theme of the song is in the lyrics: “The only thing that stays the same / Is everything changes.“

Written by legendary songwriter Bobby Braddock, Lawrence brings this emotional story to life in an incredible live performance. Braddock himself has even called “Time Marches On” one of the, if not the, best country songs he’s ever written.

Lawrence celebrated the 22nd anniversary of “Time Marches On” being released to country radio by sharing the music video on his Facebook with the caption, “‘Time Marches On’ was released to radio this week in 1996. Bobby Braddock, one of the greatest country songwriters of all time, wrote this one and I’ll always be grateful he let me cut it.“

"Time Marches On" was released to radio this week in 1996. Bobby Braddock, one of the greatest country songwriters of all time, wrote this one and I'll always be grateful he let me cut it.