By Manly Bryant on March 14, 2017
Advertisement 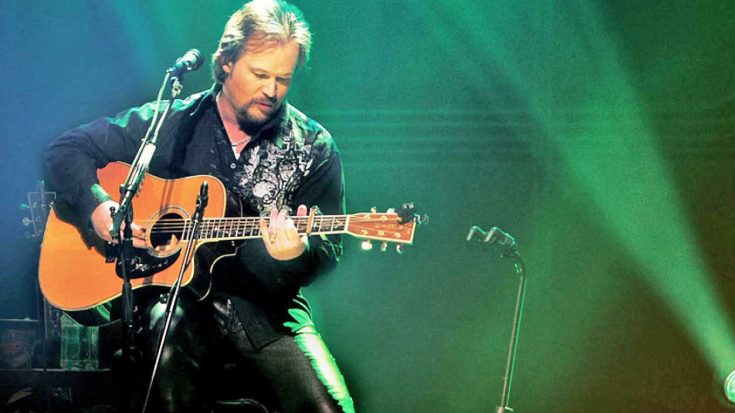 “Hell, I thought he’d live forever…” sings Travis Tritt with a heavy heart. The world lost one of the most influential musicians to hit the country music scene back in April of 2016 when country music legend Merle Haggard passed away. In honor of the artist who played a fundamental role in the foundation of the genre at large, Tritt performed an acoustic rendition of Vince Gill‘s “A World Without Haggard”.

The performance took place at Tritt’s concert at the Michigan Theater in Jackson, Mississippi. The country singer gave an intimate delivery of the song, seated with his acoustic guitar for the solo performance.

Gill wrote “A World Without Haggard” a short time after The Hag’s passing, debuting the country song on April 15 at the Grand Ole Opry. The song discusses the singer’s reaction to the news of Haggard’s death and the ultimate influence he had on his career.

“Merle Haggard was my No. 1 inspiration in my life,” Gill said in an interview with Nashville’s News Channel 5. “The way he led a band, the way he played, the way he sang, the way he wrote songs was the pinnacle in every level to me. Nobody equals Merle in my eyes. That was tough.”

You can listen to Tritt’s rendition below.

Travis Tritt is currently on the second leg of his “A Man and His Guitar” tour. This all-acoustic show has sold out at other venues in the past, so make sure to snag your tickets soon! Click here to get yours today!