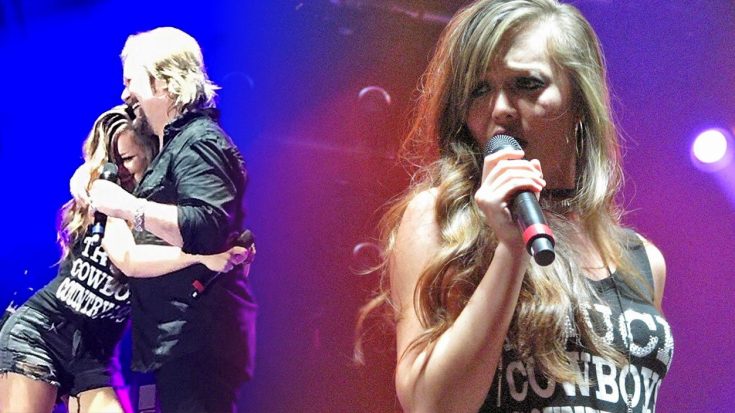 Country star Travis Tritt had the audience reeling with excitement when his 19-year-old daughter opened his show and gave fans a run for their money!

Performing at the New River Valley Fair in Virginia, Tritt packed the venue with country fans eager to hear the icon’s dazzling talent. But on top of hearing their favorite country crooner sing his hits – they got an added dose of fun when his drop-dead gorgeous daughter took the stage too!

Tyler Reese Tritt has been singing for as long as she can remember – and during this show-stopping performance she opened up her daddy’s show with one of Sara Evans’ first hits: “Suds In The Bucket.”

“Now her Daddy’s in the kitchen/ Starin’ out the window/ Scratchin’ and a rackin’ his brains/ How can eighteen years just up and walk away/ Our little pony tailed girl/ Growed up to be a woman/ Now she’s gone in the blink of an eye,” she vibrantly sang, wowing the crowd that couldn’t help but dote on the country singer’s talented little girl.

Evans’ rebel girl anthem served as the third single from her 2003 album Restless, skyrocketing to no.1 on the charts and later becoming certified Gold in 2005. It’s a song young Tyler Reese has grown up with, so naturally, it was a perfect fit!

The father and daughter have stunned the world many times before with their spontaneous performances and stellar duets that have taken social media by storm. In 2013, the two re-recorded “Sometimes Love Just Ain’t Enough”, formerly sang by Patty Smyth and Don Henley, for the re-release of Tritt’s 2007 album, The Calm After…

Be sure to check out Tyler Reese’s fabulous cover of the feisty hit below.