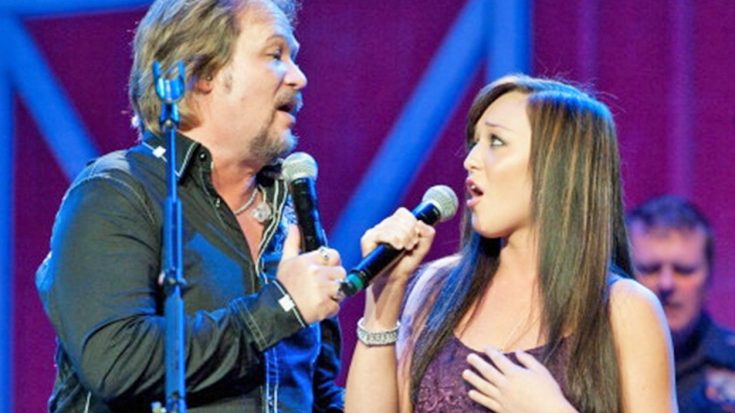 This apple definitely didn’t fall too far from the tree! The world was first introduced to Travis Tritt‘s beautiful daughter, Tyler Reese Tritt, following the release of their dazzling duet to the tune of Patty Smyth and Don Henley‘s “Sometimes Love Just Ain’t Enough” back in 2013.

Following the success of the father-daughter duo’s duet, fans of the country superstar began wondering if his daughter would go on to pursue a career in music of her own. In pursuit of a music career of her own, Tyler Reese is tagging along on her father’s tour, opening up for country singer.

During her father’s set at his show in Myrtle Beach, South Carolina back in September, Tyler Reese joined her father on stage for a duet of the beloved song, showing off her stunning vocals in the process.

So how’d they decide to record a non-country song?

“My 15-year-old daughter Tyler Reese had never heard the song, and she started singing along in the backseat,” shared Tritt according to Bigfrog104. “When it ended she made me play it again five or six more times. I was listening, but didn’t say anything.”

When they got home, Tritt shared with his wife the idea for him and Tyler Reese to record the song as a duet. They both agreed and the father-daughter duo quickly headed into the recording studio. Tritt’s idea turned out to be a great one and the song was released as the premiere single for his 2013 album The Calm After.

“I know I sound like a biased parent, but she’s got a lot of talent and charisma,” continued Tritt. “The recording speaks for itself. She really nailed it.”

The recording, released to the public on Father’s Day later that year, marked Tritt’s first song in nearly five years.

You can watch their duet below!