Trio’s A Cappella Cover Of ‘Take Me Home, Country Roads’ Is A Taste Of Heaven

By Manly Bryant on March 13, 2017
Advertisement 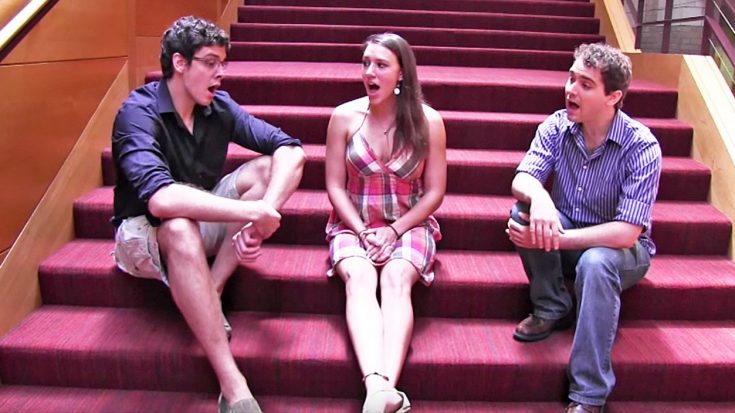 Three exceptionally talented musicians brought viewers to an entirely new spiritual level when their performance of a country classic deeply moved the troubled souls of those basking in the magical moment. Michelle Spicer, J. Casey Rule, and Andrey Stolyarov were a sound of heaven on earth when their triumphant voices perfectly coincided with another, eliciting an abundance of chills and swarming emotions.

Casually sitting on a set of red stairs, the singers counted themselves in and humbly began their a cappella rendition of John Denver‘s classic tune “Take Me Home, Country Roads”. Spicer, Rule, and Stolyarov exchanged smiles and unfathomable talent as each vocal powerhouse lent their skills to make this soulful moment nothing short of remarkable.

Denver brought the song to skyrocketing success upon its 1971 debut on his album titled Poems, Prayers, and Promises. Despite the icon’s extensive performances and endless musical repertoire, this unforgettable ballad has continued to resonate with music fans of genres, proudly becoming one of Denver’s most beloved tunes.

We’re sure that this incredibly moving performance will undeniably move your soul! Check it out below.