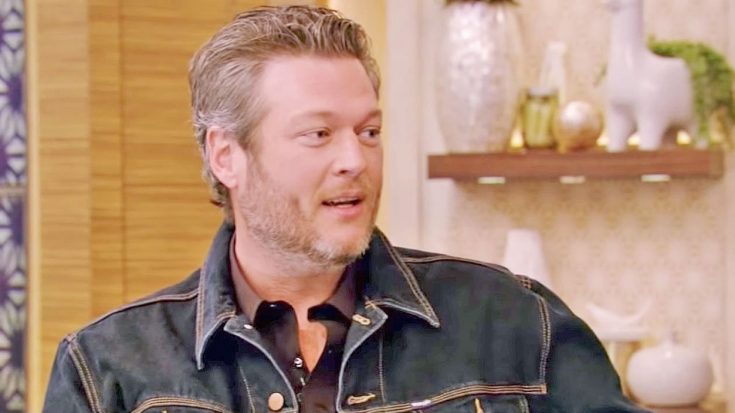 Today (November 3), Blake Shelton released his brand-new album, Texoma Shore. Containing the lead single “I’ll Name the Dogs,” the album showcases a bit more of the old-school Shelton sound that fans came to know and love him for.

The album’s title was inspired by Shelton’s lake house, which sits on Lake Texoma on the border of Oklahoma and Texas. That’s where Shelton recorded the album, so it only seemed fitting to name it after the spot.

But Shelton may not be doing any additional recording work at his lake house for a while. The same day that Lake Texoma hit the shelves, Shelton discovered that someone had crashed their truck into his lake house.

Shelton learned the news while he was over in New York City for an appearance on Live! with Kelly and Ryan to talk about his new album. He talked about the accident on-air, just moments after he heard about it himself.

“This is a weird moment for me,” he said. “Because I’m talking about ‘Texoma Shore’ and I made the album at my lake house, and I just got a phone call somebody drove their truck through the front of my lake house.”

Always the jokester, Shelton said that if the album flops, he’ll consider the crash as a sign that it was doomed from the start. He maintained a good sense of humor about the whole thing, saying, “There’s a truck sticking out of the front of my freaking house. I gotta sell some records.”

Shelton says that the crash was a complete accident, and doesn’t believe the driver drove into his house on purpose. As of press time, there has been no word about the driver’s condition.

Tune in to the clip below to watch Shelton talk more about this strange occurrence!