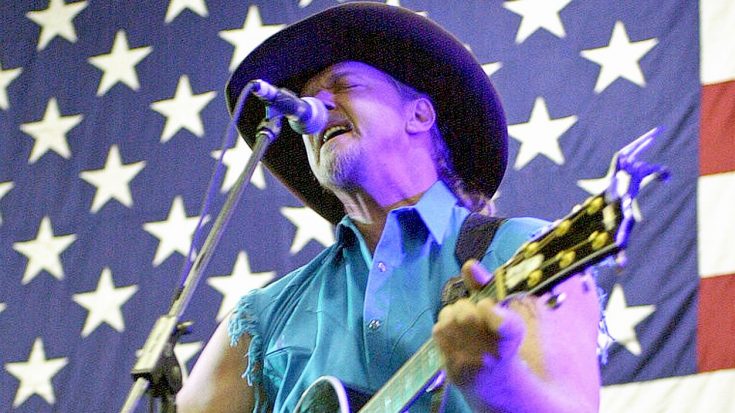 There’s no need to question whether or not Trace Adkins is a supporter of the U.S. military, because anyone who considers themselves a fan of his would know the answer is a define “yes.” Not only does Adkins support our troops, he does everything he can to help them out.

Adkins has participated in multiple USO tours overseas, where he’s entertained the troops stationed there. He’s also recorded songs honoring the U.S. Military, including his emotional hit “Arlington.” You may not be as familiar with his song “Semper Fi,” which is a powerful tribute to the U.S. Marine Corps.

“Semper Fi” was included on the deluxe edition of Adkins’ 2011 album, Proud to Be Here, and was co-written by Adkins, Kenny Beard, and Monty Criswell. Adkins spoke to The Boot about the inspiration for the song, saying they wrote it because he never really gets the chance to perform for them:

“A lot of times we go into these combat zones and do the USO trips and there aren’t any Marines at the shows. We don’t get to go where the Marines are because the Marines are stationed in really hot [dangerous] areas. They won’t let us go there and they don’t get to come to the shows either because they are out in the middle of nowhere. So we decided we would do a song for the Marine Corps and give it to them.”

“Semper Fi” is certainly a fitting tribute to the strength and reliance of the Marines, as Adkins sings, “For the few that wear the dress blues/Haircut high and tight/Who are proud to be the first ones in the fight/Semper Fi.” You can watch Adkins offer his salute to the Marine Corps in the performance featured in the video below.

As Adkins sings in “Semper Fi,” the Marines and all of our nation’s military members fight so that we can enjoy our lives back home. In his new single, “Lit,” Adkins sings about some of those great parts of life, such as tasty fried chicken and the love of a beautiful woman.

Check out Adkins’ lyric video for “Lit” below, and if you can’t get enough of the tune, be sure to head over to iTunes and download it here!