Undated Footage Captures The Judds’ “Coat Of Many Colors” Cover

By Miranda Raye on February 20, 2018
Advertisement 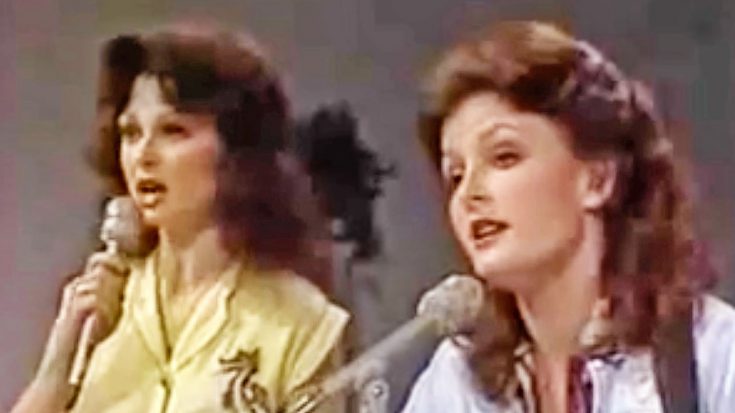 Just a little over a decade after Dolly Parton further established herself as a powerful female artist with “Coat of Many Colors,” a female country duo made their way on the scene.

That duo was The Judds, comprised of mother Naomi and daughter Wynonna.

Before The Judds took the stage, they took the screen! Naomi's car was rented for the movie "More American Graffiti." Both Naomi and Wynonna landed roles as extras in the film. You can learn more about the mother-daughter duo by visiting our exhibit, "The Judds: Dream Chasers". pic.twitter.com/pcJ4DhuvV7

After years of performing together, The Judds were finally signed to a record label in 1983. Together, the two won five Grammy Awards and scored a host of hits, including “Why Not Me” and “Mama He’s Crazy.”

Naomi’s sweet, smooth voice took lead most of the time, while Wynonna provided backup with her strong, deep tone. The dynamic between mother and daughter can be heard quite well in a long-forgotten clip that shows them singing “Coat of Many Colors.”

This Is Going Way Back

This undated footage shows The Judds at the beginning stage of their career. Naomi stood closest to the front, guitar in hand, while Wynonna stood a few steps behind her.

Introducing the song, Naomi explained that when they played it for her Papa Judd a few years prior, he started to cry. They had never seen him so emotional before, so when they asked him why he was crying, he said it was because he once had a “Coat of Many Colors” himself.

The #studioB tour at @countrymusichof was so good I actually started tearing up. This is where Elvis recorded so many of his hits and my Queen @DollyParton wrote and sang Coat Of Many Colors and I Will Always Love You. pic.twitter.com/m0VWeK7kMh

Needless to say, the song is one that means a great deal to The Judds, and their love for it shows through in their performance. Just like usual, Naomi was the one who sang the majority of the time. Her gentle voice soared through the words, instantly enchanting all who watched her.

Get Ready To Be Amazed

But the best parts were the brief moments when Wynonna jumped in to offer her vocals to the song. When Wynonna’s voice met her mother’s on the chorus, the resulting sound was exquisite.

Watching this, we’re surprised that this clip went practically unrecognized for so long. Now, we’re bringing it back for y’all to enjoy. You can do so by tuning in to the video below.

This performance is a true gem, there’s no denying that.