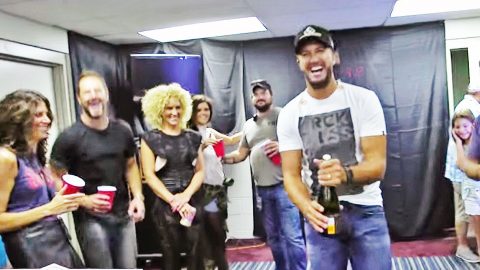 Ever wonder what goes down behind-the-scenes of a Luke Bryan tour? The country superstar is being more open with fans than ever in a new video uploaded to his Youtube account in part of the ongoing series “Luke Bryan TV” entitled “Unseen Moments!”

“My tip is,” says Bryan at the introduction of the video. “What happens in Vegas, no longer stays in Vegas. It gets uploaded to the iCloud.”

That is just one hysterical moment in Episode 13 of LBTV. The video montage gives fans an inside glimpse of what life is like on the road for Bryan and his crew and what really goes down off stage. From threatening Little Big Town with a champagne shower, to Keith Urban sneaking up on him mid-conversation, and partying on a boat while singing his hit “Huntin’, Fishin’ & Lovin’ Every Day,” things got a little wild.

While there are probably aspects of the tour too wild for the video, from the looks of it the Kill the Lights Tour was as fun for him and his crew as his fans had attending. You can watch the hysterical video below and be sure to let us know what you think in the comments!