Unsuspecting Country Singer Gets The Surprise Of A Lifetime By His Idol, Josh Turner 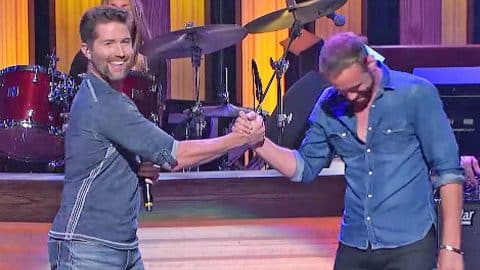 Many country stars dream of performing on the Grand Ole Opry stage. Standing in the famous Opry Circle, where so many legends have stood before them, is quite an honor.

Rising country star Drew Baldridge got that opportunity on Thursday (June 16). Singing his newest single “Rebound”, Baldridge wowed the audience from the moment he stepped on stage.

In between songs, he told a story about the first time he ever visited Nashville. His mom took him for his 18th birthday and got tickets to a Josh Turner show. Turner just so happens to be Baldridge’s favorite singer.

He got a hat signed by Turner and it was that moment that Baldridge knew he wanted to move to Nashville to pursue a career in country music. Paying tribute to the moment, he announced he would be singing Turner’s hit, “Your Man”.

To Baldridge’s surprise, the Opry got Turner to come out and surprise him during “Your Man”!

The look on Baldridge’s face was PRICELESS! He couldn’t even continue singing. All he could say was, “Oh my God!”

Turner took over for a verse and Baldridge joined him for the chorus, but it didn’t last long because he was freaking out so much! He was singing with his idol; we don’t blame him.

Baldridge shared his excitement on social media saying, “Not only was it my [Opry] debut, but [Josh Turner] surprised me by running out on stage and singing with me! My life is made!!!”

Not only was it my @opry debut, but @joshturnermusic surprised me by running out on stage and singing with me! My life is made!!!

Watch the AMAZING moment below!