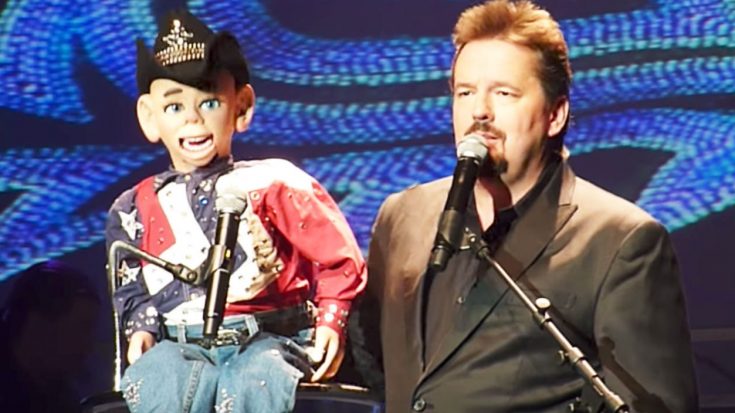 Terry Fator took America’s Got Talent by storm back in 2007 with a series of impressive singing ventriloquism acts, going on to be named the Season 2 champion of the talent competition. The year following winning AGT, Fator signed a five-year and $100 million contract with the Mirage in Las Vegas as the headlining performer.

His show, Terry Fator & His Cast of Thousands, consists of the ventriloquist doing impressions of some of the most recognizable names in music, including none other than country music superstar Garth Brooks. At a show back in 2010, Fator and the puppet Walter T. Airdale teamed up for a rowdy performance of Brooks iconic “Friends in Low Places.”

“These women ain’t turned on yet,” complained the puppet.

“How can you tell?” asked Fator.

“There ain’t no panties on the floor,” replied the puppet before revealing he knew just the way to get the women in the audience “sizzling like a plate of fajitas.”

He then rolled into an unbelievable performance of Brooks’ smash hit, Fator’s mouth remaining sealed shut throughout the entire performance. To the puppet’s devilish delight, the crowd can be heard clapping their hands to the beat of the song.

“Friends in Low Places” dominated the country charts following its release in 1990, remaining at No.1 for an impressive four weeks. Additionally, the barroom anthem went on to earn him “Single of the Year” at both the ACM Awards and the CMA Awards.

You can watch Fator’s impression of Brooks below.