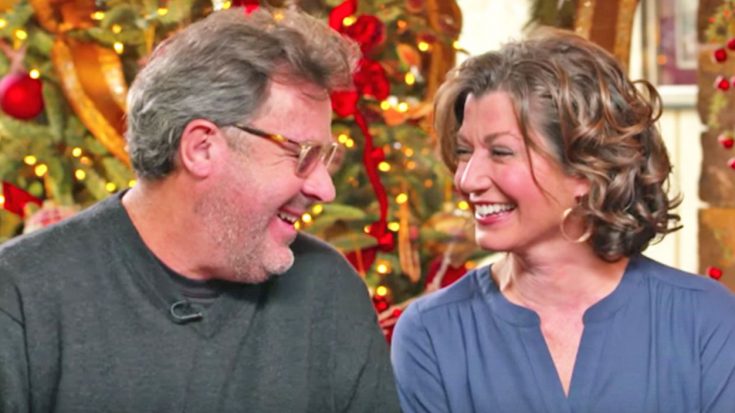 One of the best parts of the Christmas season is being surrounded by family. For this particular Nashville couple, this sentiment is so true.

In a segment for the Today show, Jenna Bush Hager traveled to Nashville, Tennessee where Vince Gill and Amy Grant opened up their home to talk about what Christmas means to them.

Every year for the past ten years, Gill and Grant have put on a slew of Christmas shows at the iconic Ryman Auditorium. This is always a special time of year for the married couple – they met at a Christmas concert 24 years ago.

Even though they have been married for almost two decades, they seem more in love than ever, offering up compliment after compliment to each other.

“This is where [Amy] really shines. This time of year, these songs, this spirit,” Gill said. “The real spirit behind Christmas she has that over anybody I’ve ever met. Me? Not so much. I just get to stand beside her and play a little guitar and cheer her on and that’s a good feeling.”

Grant took no time to then gush about her extremely talented husband.

“When you see somebody doing something they love, you fall in love with them all over again. He might laugh and joke and say he’s not wild about doing all the crooner songs, but he kills them. And then he starts playing guitar and everybody levitates. He’s got a rare gift and I get to stand next to him and go, ‘Well I’m crazy about you. I would stalk you if I weren’t married to you’,” she said with a laugh.

Gill and Grant admit they are extremely thankful for their family, their combined five kids, and being grandparents to their rambunctious grandson Wyatt and his baby sister Everly.

Not sure what the other Eagles were doing pre-show here in Boston. After getting beaten in ping pong several times by the tour rigger, Vinny and I had crew meal and caught up with Jenny and the grandkids.

Hager asked Gill and Grant what Christmas meant to them, and Grant quickly replied, “Family and showing love.” It took her husband a bit longer to come up with an answer.

“I didn’t know there were going to be any hard questions today,” Gill joked. “Christmas means safe. I feel safe with this child right here, it’s the best feeling of all.”

It doesn’t get much more romantic than that. Watch their full interview with Hager below.