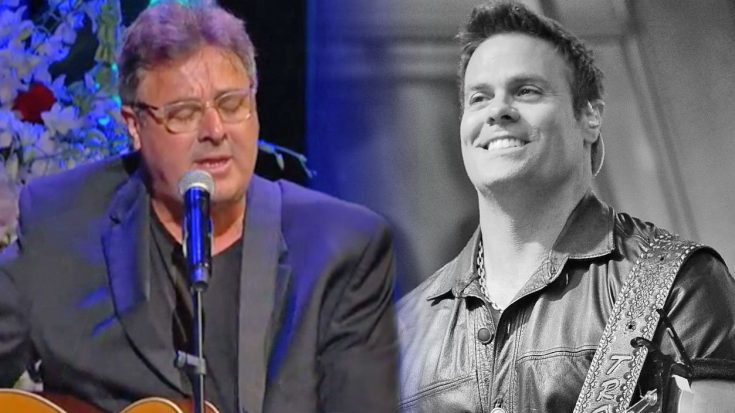 Fans, friends, and family of Troy Gentry came together on Sept. 14 to memorialize him at the Grand Ole Opry. His close friend Storme Warren, Pastor Dr. Michael Glenn, and family friends Eddie Lunn and Rafael Calderon all shared stories of their relationships with Gentry.

When Vince Gill walked onto the stage, folks most likely looked for more tissues because he always delivers the most emotional performances. While speaking of the great man that was Troy Gentry, Gill began tearing up as he was addressing Gentry’s bandmate Eddie Montgomery, who considered Gentry a brother.

“I hope you lean on this family. It’s a good one. And don’t disappear. Come out here and let this family love you. This family has a long history of loss,” he said as he choked up. “I just encourage you to stay within this family.”

The camera cut to Montgomery, who looked visibly emotional and was being comforted by Ricky Skaggs and two other Opry members.

Gill then revealed he wouldn’t be singing “Go Rest High On That Mountain,” the song he normally performs at Opry funerals, but instead he was asked to perform his own hit song “Whenever You Come Around.”

It was a very special song for Gentry and his wife, Angie, as it was the very first song he ever sang to her.

“To know that the words I’d come up with, a song about longing made an impact on him, that he wanted to share with [Angie],” he said while strumming the guitar intro to the song.

Watch him speak about Gentry below, as well as perform “Whenever You Come Around.”