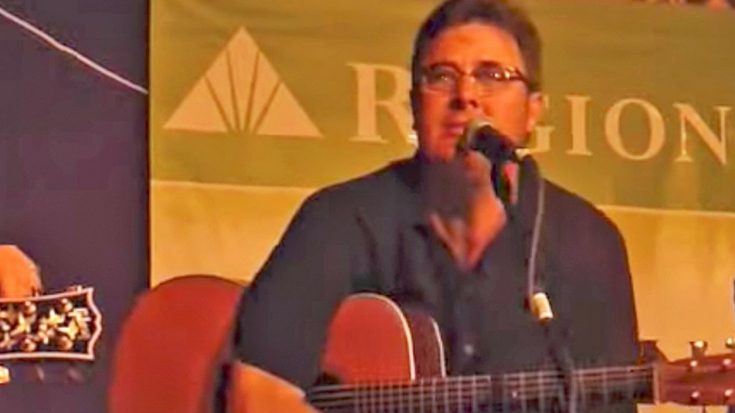 Country music icon Vince Gill was at a loss for words when receiving the news that a man he had befriended in his teenage days had passed away, prompting the singer to deliver an emotional tribute performance of his farewell ballad “Go Rest High”.

“In case you haven’t heard, the legendary Earl Scruggs just passed away,” Gill regretfully informed his crowd, eliciting voices and gasps of sadness. “I’ve known him since I was a teenager, and it’s like losing a dad. So, I’m gonna sing this for him,” he spoke before strumming the intro to his unforgettable hit.

The crowd grew silent, absorbing Gill’s breathtaking talent and unmistakable emotion derived from the loss of Scruggs. “Go rest high on that mountain/ Son, your work on earth is done/ Go to heaven a shoutin’/ Love for the Father and the Son,” Gill sang through closed eyes.

Greeting the singer with a uproarious applause, the audience was left nearly speechless by Gill’s flawless talent and piercing emotions. Scruggs passed away on March 28, 2012 at the age of 88. However, this ballad has given its final farewell to a family member of Gills far before Scruggs’ death, initially penned as a tribute following the death of Gill’s older brother.

You can experience the unforgettable performance below.