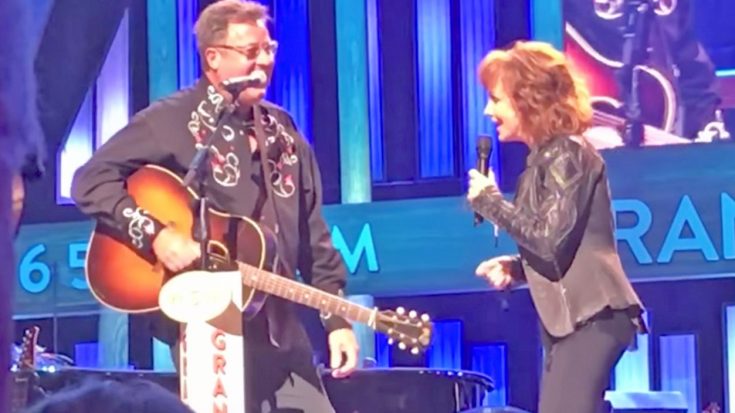 Many country fans came together to celebrate the 40th anniversary of Reba McEntire’s very first performance at the Grand Ole Opry in September 2017. The incredible evening included wonderful performances, a celebratory cake, and tearful surprises.

Carrie Underwood and Vince Gill were two performers that took part in the monumental celebration. Underwood and McEntire performed “Does He Love You,” and of course, Gill and the red-headed stunner had to perform their duet “Oklahoma Swing.”

“Oklahoma Swing” was released by Gill and McEntire in 1990 as the second single from Gill’s album When I Call Your Name. It reached the Top 15 on the Billboard country chart and has become a fan favorite for both artists.

Being an Oklahoma girl herself, we’re sure McEntire loves singing this song, so almost anytime she and Gill get together, they have to perform it!

Moments after the song was over, Gill said someone special wanted to send a video message. Everyone looked up at the screen and someone said, “Hey Reba!” but the video feed cut out!

“I don’t think the video’s workin,” Gill said, before the legendary Dolly Parton cut him off and said, “I’m workin’!”

McEntire stopped dead in her tracks with her mouth wide open and turned around to see Parton walking towards her on stage. The “Fancy” singer wiped a few tears away as Parton said some very kind words to her.

“I remember 40 years ago, because when you made your debut, and actually, I was here for some reason, and you were new. You were supposed to have two spots on the Opry, and they gave me one of them. So, I just wanted to give it back to you tonight,” she joked. “I just wanted to come out and say hello, and say congratulations, and how much I love you.”

Parton and Underwood then presented McEntire with a beautiful cake and Parton led the crowd in singing “Happy Anniversary” to the tune of “Happy Birthday.” Parton changed the final lyric of the song to, “I will always love you.”

The tears kept flowing for McEntire who was completely overcome with emotion. Watch the full video of “Oklahoma Swing” and Parton’s surprise below!