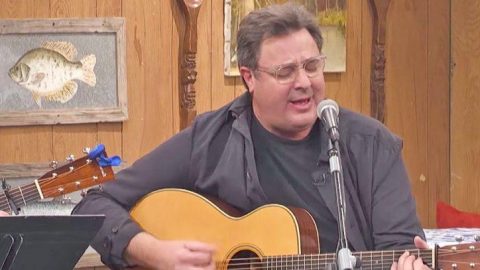 Over time, Merle Haggard came to be known as “the poet of the common man.” The reason he earned such a nickname lies in his songwriting, and the fact that he wrote about real people and situations. Everything he wrote about was something that the average person could relate to, from songs about hardship to tales of heartache.

One of Haggard’s songs that falls into the latter category is his 1970 single, “I Can’t Be Myself.” The song was the second single released off of Haggard’s chart-topping album Hag, which also contained the songs “Soldier’s Last Letter” and “Jesus, Take a Hold.”

“I Can’t Be Myself” is narrated by a man who finds himself trapped in a relationship that has left him unhappy. He feels unable to be his true self around the person he’s with, and it is starting to wear him down. The song takes on a particularly somber tone as it moves on, with the man singing, “But I believe the Lord knows I’m unhappy, cause I can’t be myself when I’m with you.”

Apparently the story told in “I Can’t Be Myself” was one that Haggard’s fans were easily able to relate to, because the song performed well on the charts. It reached the third spot on the Hot Country Songs chart in the U.S. and claimed the second position on the Canadian country chart. In addition, the song climbed as high as the sixth spot on the U.S. Bubbling Under Hot 100 Singles chart.

All of these years later, and “I Can’t Be Myself” is a song that continues to resonate with people far and wide. It’s a song that Vince Gill feels a clear connection to, as it’s the song he picked to sing in Haggard’s honor during an appearance on Larry’s Country Diner.

Since Haggard passed away in April 2016, Gill has been one of the main artists leading the charge in tribute performances. He even wrote an original song about him, titled “A World Without Haggard.”

Gill’s rendition of “I Can’t Be Myself,” has to been one of the best tributes to Haggard that we’ve heard so far. He poured pure emotion into his performance of the song, which helped bring out the heartbreak in the lyrics. His emotion also showed how much appreciation he had for Haggard, which made his performance all the more meaningful.

In addition, the song allowed Gill to showcase what it is that makes him stand out from all other artists. He got the chance to show off his extensive range in the song, as he moved from singing louder high notes to soft, nearly whisper-like low notes.

Overall, Gill’s cover of “I Can’t Be Myself” is the textbook example of what a tribute performance should be. You can watch it by scrolling down to the video below.

We couldn’t think of a better person than Gill to honor “The Hag” in such a meaningful way.