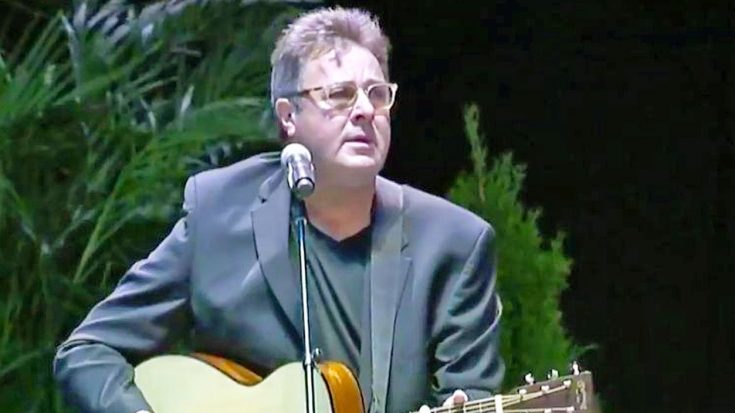 Following the tragedy that unfolded in Las Vegas at the Route 91 Harvest Festival, the country music community has entered a deep state of grief. Artists and fans have joined together in mourning those who were killed, and have shared their prayers for the injured.

Once the news of the shooting made its way into the news, the response from the country music community was immediate. Artists flocked to social media to share their feelings about the event, which ranged from those of anger to full-out grief.

Wanting to provide a source of support for the Nashville community, the CMA and Mayor Megan Barry put together a candlelight vigil that took place on Monday night (October 2). The vigil allowed the citizens of Nashville to remember the victims through moments of reflection and songs.

One of the performers who attended the vigil that night was country music icon Vince Gill. As he often does when someone passes away or when a tragic event occurs, Gill chose to honor the shooting victims by performing his beloved song, “Go Rest High on That Mountain.”

Gill first started writing “Go Rest High” following the death of country singer Keith Whitley in 1989. He completed the song after his brother, Bob, passed away in 1993 after suffering a heart attack.

“Go Rest High” was released in August 1995 and reached the 14th spot on the Billboard Hot Country Songs chart. Although it wasn’t nearly as big of a hit as some of Gill’s other singles, it is a song that he will always be known for.

Gill’s performance of “Go Rest High” at the vigil for the Vegas victims was as emotional as ever. With nothing but the sound of his own guitar to back him up, everyone could hear the vulnerability and grief in Gill’s voice as he sang.

You can tune in to the video below to watch Gill’s heart-tugging performance of “Go Rest High” at the Nashville vigil for the Vegas shooting victims. We’re sure his performance brought some comfort to those who are hurting in the aftermath of this terrible event.

If you’d like to do your part to help in the wake of the Vegas shooting, you can do so by donating to the Las Vegas Victims’ Fund. Established by the Clark County Commissioner and the Las Vegas Sheriff, this GoFundMe-verified fundraiser will provide assistance to victims and families affected by the shooting.

You can donate to the Las Vegas Victims’ Fund by clicking the link here.