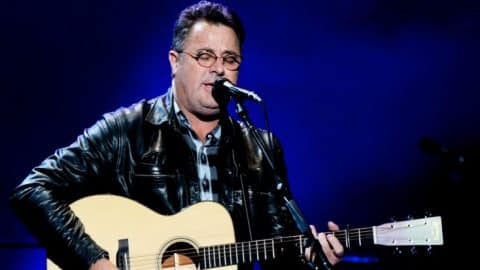 Out of the many songs Vince Gill has created over the years, none are more emotional than his 1995 single “Go Rest High on That Mountain.”

Gill originally started writing the song in 1989 following the death of country star Keith Whitley. But he didn’t finish the song until a few years later, when his older brother, Bob, passed away.

When the legendary George Jones passed away in 2013, Gill performed “Go Rest High on That Mountain” during Jones’ funeral service at the Grand Ole Opry.

Gill was so overcome by emotion during the performance that he could hardly sing the words at some points. He moved the entire crowd to tears with his performance, and the song continues to touch audiences whenever he sings it.

During an interview with PopZette, Gill said that’s exactly what he wants his music to do…he wants it to move people. “At the end of the day, I want my playing to move somebody. Not to impress them,” he said.

Gill shared that even though he is a generally happy person, he turns to his music to express his sadness and sorrow. Of course, no other song expresses those feelings more than “Go Rest High on That Mountain.”

Since Gill has such a personal connection to the song, the pain of writing it hit him hard. “When something comes from a really honest place, it goes a few notches deeper,” Gill said.

There’s no denying it, “Go Rest High on That Mountain” is a beautiful song. You can watch Gill perform it in the video below.