By Miranda Raye on January 27, 2017
Advertisement 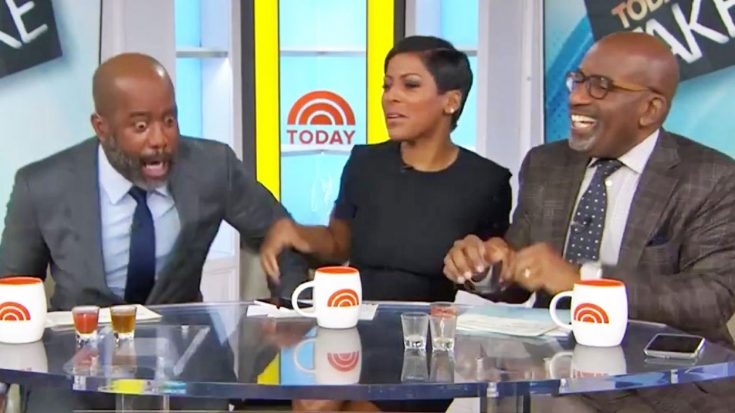 For a couple of days, Darius Rucker traded in his blue jeans for a suit as he joined the hosts of TODAY. He was excited to announce on Tuesday (January 24) that he would be co-hosting the show for the next two days. But now, he may think twice before he agrees to appear on the show again!

During the TODAY’s Take segment, Rucker joined Tamron Hall and Al Roker to talk about a new horror movie called Rings. The movie, which is set to hit theaters on February 3, inspired a prank that has been viewed millions of times.

While browsing through televisions in an electronics store, unsuspecting customers got the scare of their lives. In the prank, an actor dressed like the terrifying-looking character Samara from Rings crawled out of one of the televisions and came running at the shoppers.

Rucker watched part of this prank video with his fellow TODAY co-hosts, and was understandably freaked out. But he had no idea what was in store for him!

As he was watching footage of the TODAY hosts being pranked by Samara previously, Rucker got the living daylights scared out of him. From out of nowhere, Samara came bounding into the room. His reaction was priceless, and he quickly jumped out of his seat to seek refuge behind Roker.

Rucker was so scared, that he actually had tears in his eyes! He started laughing once he got over the initial shock, but made it clear he didn’t enjoy it. “That was not funny! That was not funny at all!” he said. “Oh that just scared the heck out of me.”

We can’t blame him, we probably would have reacted the same way!

Tune in below to watch Rucker’s hilarious reaction to being pranked on TODAY. The slow-motion replay at the end is the best part!