By Miranda Raye on December 7, 2016
Advertisement 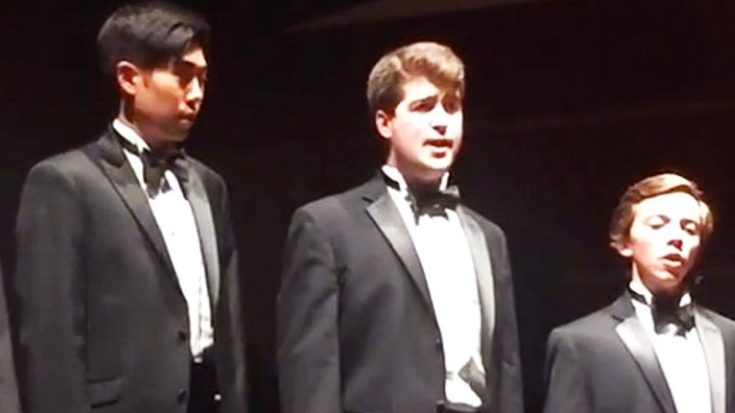 Lee Greenwood is one of the most highly-respected artists in the entire music industry. The country music icon has released over 20 albums over the course of his decades-long career, and has charted over 35 singles.

Of course, Lee is best known for “God Bless the USA.” The song has maintained a high level of popularity since its 1984, and remains a beloved American anthem.

It seems that Lee has passed his love of music on to his son Dalton. So far, Dalton seems set on following a different path than his father, as he’s currently a Biochemistry major at Washington & Lee University in Virginia.

But despite his interest in a different career path, Dalton still has a deep passion for music in his heart. He is a member of his university’s choir ensemble, and had a featured solo during their concert.

Being the proud father that he is, Lee shared a short video of Dalton’s performance. Since Christmas is approaching, Dalton’s ensemble performed an arrangement of the traditional Christian hymn “O Come, O Come Emmanuel.” It’s a song that has a special significance to the Greenwood family. As Lee pointed out on the video he shared, his wife Kimberly performed the song at one of his Christmas concerts 20 years ago.

Dalton continued the family tradition by singing a magnificent rendition of the song during his choir ensemble. There were several moments when he was left to sing all by himself, and he proved that he is capable of holding his own.

Dalton seemed like a natural out there on stage, and his confidence was reflected in his voice, resulting in a powerful performance.

Lee was awfully proud of his son’s performance, and he has every reason to be. He did a great job! Tune in below to watch him sing “O Come, O Come Emmanuel.”

Just in case biochemistry doesn’t work out for him, at least Dalton knows he can always come back to singing!

This happened last night in Lexington VA at W&L! This is our son Dalton singing the same song that his mother Kim sang in my Christmas show 20 years ago! Not bad for a BioChem major! #soproud @wlunews @wlulex #virginia #proudparents @knockongreenwood