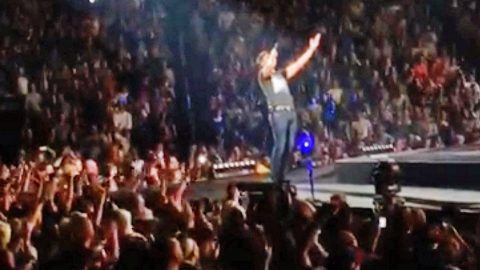 Luke Bryan is often praised as one of the greatest entertainers in all of country music. He’s been nominated for Entertainer of the Year at both the ACM and CMA Awards, and has taken home the trophy a total of three times.

Anyone who has been to one of Bryan’s concerts can see exactly why he’s earned the reputation as such a skilled entertainer. He gives each and every performance his all, delivering a show packed with fun moments and some killer dance moves for good measure.

Bryan gets the chance to really show off his talents as an entertainer during a medley that he performs in the middle of his shows. While these mashups often feature pop songs, Bryan has also tried his hand at rock favorites and country classics. Over time, these medley performance have come to be considered one of the main highlights of Bryan’s shows.

During a show at the Dunkin’ Donuts Center in Rhode Island on March 4, Bryan took his usual medley performance to the next level. That’s when he decided to break out into an energetic rendition of Neil Diamond’s “Sweet Caroline,” and the crowd went wild.

Before long, Bryan ended up leading the packed arena in an epic sing-along to the tune. In fact, you could hardly hear Bryan’s voice over the crowd’s enthusiastic singing.

This performance lends a whole new meaning to the phrase “he brought down the house.” That’s exactly what Bryan did with his performance of “Sweet Caroline.”

Tune in below to watch Bryan sing this classic tune along with an entire arena full of people. Wish we could have been there, because it looks like they had a blast!