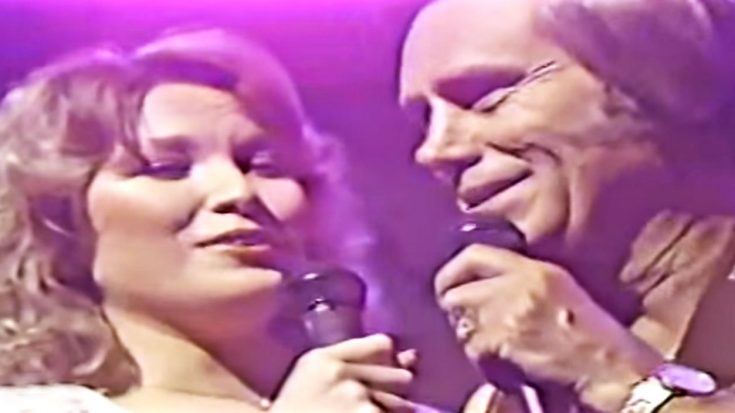 One of country music’s favorite songs, and one that has been covered time and time again, “Together Again” gets a vibrant new sound with the enchanting and melodic voices of two country legends.

Joining a blushing young Tanya Tucker on stage to roaring applause from the crowd, George Jones sauntered out casually with a smile on his face before planting a kiss on Tucker’s cheek.

Friends for decades, these two had performed together before, but it was definitely a rare and special treat when they got together!

Singing country music’s beloved classic, “Together Again,” Tucker and Jones pour their hearts and souls into this treasured performance that earned a standing ovation from the riveted audience!

“Together Again” was a song originally written and recorded by country legend Buck Owens in 1964. It was issued as the “B” side to his single “My Heart Skips A Beat” and earned much recognition for its featured steel guitar solo.

Throughout the next several decades, many iconic musicians covered this song both in live performances and on their own albums. Folks like Ray Charles, Glen Campbell, Emmylou Harris, Kenny Rogers, Dottie West, Dwight Yoakam, and Vince Gill have all crafted their own versions of this infallible hit song.

Watch Tanya Tucker and George Jones dazzle and delight the crowd in the video below!