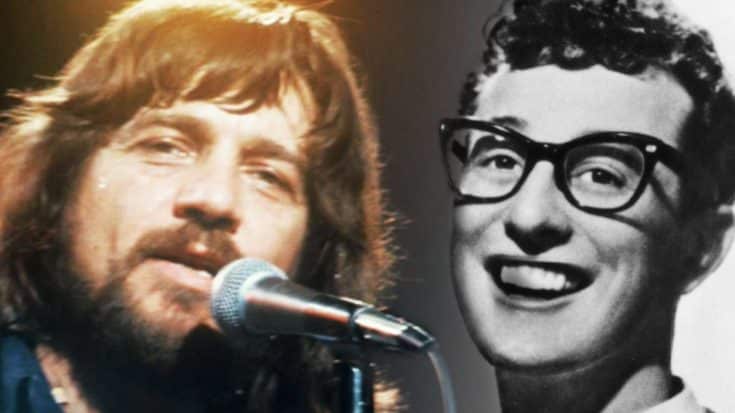 Giving up his seat on the plane to another musician, the country legend recalls the words that would haunt him forever.

Hired as a bassist for Buddy Holly following Holly’s choice to disband from The Crickets, Waylon Jennings got a huge boost to his musical career from touring with the rock and roll star.

Jennings and Holly took off on The Winter Dance Party Tour beginning on January 23, 1959, in Milwaukee, Wisconsin and then continued on across the midwestern United States. The sheer distance between tour dates hadn’t been accounted for and as a result, the traveling became an utter nightmare for all the musicians.

Shortly after the tour began, the tour bus lost its heater to a mechanical breakdown, and the team began to fall ill; the drummer, Carl Bunch, was even hospitalized with frostbitten toes.

Today marks 59 years since "the day the music died", when Buddy Holly, Ritchie Valens, and J.P. "The Big Bopper" Richardson tragically died in a plane crash, in 1959. What is your favorite song by one of these artists? pic.twitter.com/JRAn41tdU5

On Monday, February 2nd, the tour stopped in Clear Lake, IA – an unscheduled stop for the band. Although they weren’t planning on playing a gig, tour presenters offered a show to a local venue owner, and they were set to play that evening.

After the show, Holly was overcome with frustration related to the traveling conditions and chose to charter a plane to Fargo, North Dakota where the rest of the band would meet him. Holly, Jennings, and Tommy Allsup were scheduled to take off just after midnight, but another musician on the tour J.P. Richardson (“The Big Bopper”) asked Jennings for his seat as he had come down with the flu and needed time to rest. Allsup lost his seat in a coin toss with Ritchie Valens and also stayed behind.

On this day in 1959, a plane crash near Clear Lake killed Buddy Holly, Ritchie Valens and The Big Bopper.

It would forever be known as "The Day the Music Died." pic.twitter.com/McPLImG6Ms

When Holly learned that Jennings was giving his seat up, he jokingly prodded the would-be country star. “I hope your ass freezes on the bus!”

“Here I am, about 19-years-old and I said, ‘Yeah, well I hope your old plane crashes’, and God almighty – for years I thought I had caused it…” Jennings recalled with a heavy sigh.

This was taken January 1959 before Waylon Jennings gave up seat on Buddy Holly's doomed plane 55 years ago next week: pic.twitter.com/mwF7TyYHIy

Just hours later, and minutes after takeoff, the plane carrying the three musicians, Buddy Holly, J.P. Richardson (“The Big Bopper”), and Ritchie Valens crashed into a cornfield – driven down by a worsening storm and an inexperienced pilot.

Nearly twenty years later, Jennings penned a song dedicated to his lost friend and the emotional torment he had felt for a great deal of time after Holly’s death.

The song, “Old Friend” was released on his album, Are You Ready For The Country in June 1976 and was certified gold, topping the Billboard Country Albums chart.

Check out the videos below for the interview Jennings gave to CMT about Holly’s plane crash as well as the song he penned in Holly’s honor.