Weeks Before His Death, George Jones Gives Final Performance Of ‘He Stopped Loving Her’

By Manly Bryant on April 5, 2016
Advertisement 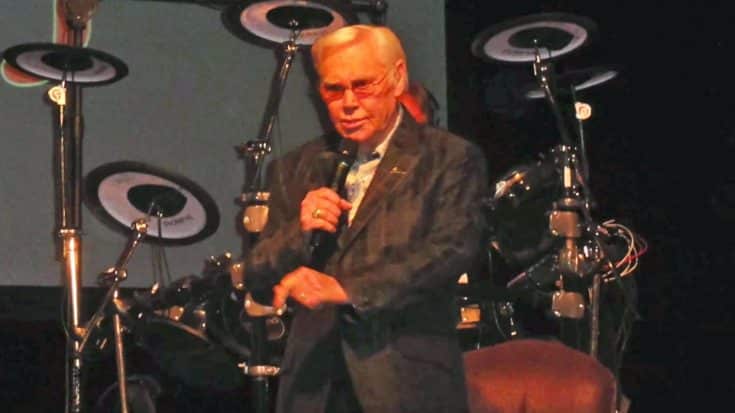 Achieving more than 150 hits across his six-decade-long career, one of the artists who changed the landscape of country music took to the stage for a performance that would make history…

Nicknamed “The Possum,” George Jones was a man with a very storied tale and one that millions of people admired. He was an incredibly talented singer, songwriter, and musician.

Jones’ singing style and voice were instantly recognizable for many years, and even more so following the stunning success of his 1980 mega-hit, “He Stopped Loving Her Today”. He reached No. 1 with the single that same year and it would go on to become his signature song earning him a seemingly endless number of awards.

In March 2012, the legendary country star was hospitalized due to a respiratory infection and after his release, he was admitted months later for the same infection. Shortly after the two hospital stays, the singer announced a farewell tour with his final tour date of November 22, 2013.

Tragically, Jones wouldn’t make it through the end of the tour. In April 2013, the singer was moving along on his tour and stopped in Knoxville for a performance at the Knoxville Civic Coliseum.

It was there that Jones would perform his final concert to the hundreds of attending fans and give his very last performance of the hit that saved his career.

His performance during the concert has been described by fans as “a heroic show” and “a testimony to the mans love for his fans and his music.”

On April 18th, 2013, just 12 days later, Jones was admitted to the hospital again for a slight fever and irregular blood pressure. All of his remaining concerts were postponed due to his health, and the singer stayed in the hospital for several more days.

In the early hours of April 26th, 2013 the legendary country star many of us grew up listening to, passed away from respiratory complications.

Below is a video of the late singer giving fans at the Knoxville concert a performance-to-remember with his most notable song “He Stopped Loving Her Today.”

Although Jones is no longer with us, his legacy of music lives on in the blood of country music and his signature song re-entered the country charts following his death, peaking in the Top 20.