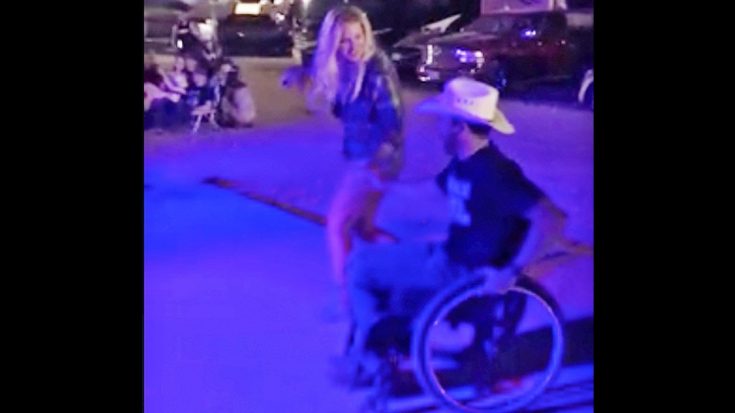 If this isn’t relationship goals, then we aren’t sure what is. At Arizona’s premiere country music festival, Country Thunder, a cowboy in a wheelchair by the name of Jimmy Pierce shared a romantic two-step with his gorgeous wife Carrie to the tune of Luke Bryan‘s “Drunk on You.”

The couple held hands throughout the entirety of the dance, the man skillfully using his free hand to move his chair to the beat of the music while his wife danced at his side. Their song of choice was one with a special meaning, as it’s the first song they danced to together as husband and wife when they married November 20, 2016.

They first began dancing the night away together over four years ago when they met at a country bar in San Diego, California. A year and half after they met, Jimmy suffered a tragic fall leaving his spine broken in several places. Throughout his entire recovery, Carrie stayed by his side.

“[Carrie] stayed with me throughout my entire rehabilitation,” shared Jimmy. “She didn’t leave my side.”

“Drunk on You” tells the story of a man so infatuated with a woman that he feels “drunk” on his love for her, and from the looks of it, the man of our story can relate. The couple learned the steps to the romantic love song at Infinite Flow – A Wheelchair Dance Company.

You can watch their dance to “Drunk on You” below.

Jimmy and his beautiful wife Carrie crushing couples line dancing while we were at Country Thunder 2017 Florence, Arizona!