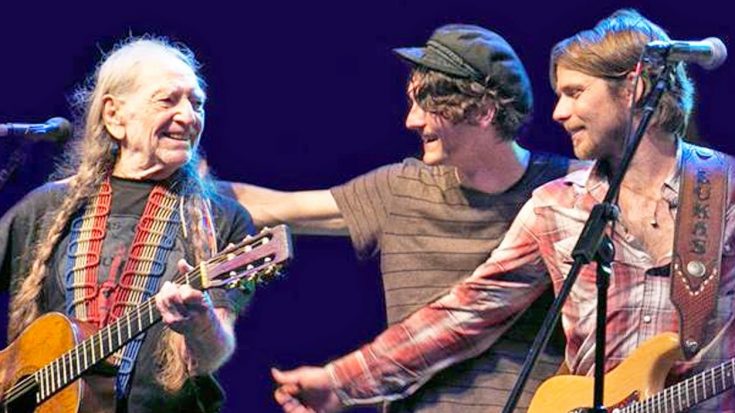 Willie Nelson has been referred to as many different names. Willie, The Red Headed Stranger, Shotgun Willie, but to Lukas and Micah Nelson, he was just “Dad.”

He was a successful country singer well before they were born in 1988 and 1990, but he never pushed his career on his children. In fact, it wasn’t until Lukas was about ten years old that Willie taught him to play guitar. Lukas fell in love and has been playing and singing ever since.

“The first song you taught me, Dad, was ‘Blue Eyes Crying In The Rain.’ The first chord I ever learned was E,” Lukas said in the studio. “I remember asking you what you wanted for your birthday. I was like 10 or 11.”

Willie’s response back then was that he wanted Lukas to learn how to play guitar, so he taught him an E chord, which is part of the introduction of “Blue Eyes Crying In The Rain.”

Lukas played what he learned that night and Willie nodded and smiled, remembering the great memory.

“Sing it,” Willie told his son, who, without hesitation, happily obliged.

Lukas began the song, his vocals sounding eerily similar to his country legend father, and Willie and Micah joined him singing the harmonies on the chorus.

Willie obviously thinks highly of his sons’ talents, as he often tours with them and even released a full album called Willie and The Boys: Willie’s Stash Vol. 2, which is available for purchase now.

On the album, he and his two sons cover Hank Williams, Hank Locklin, Hank Snow, and some of his own hits. If you’d like to purchase a copy of the album, click here.

Watch them perform “Blue Eyes Crying In The Rain” below.