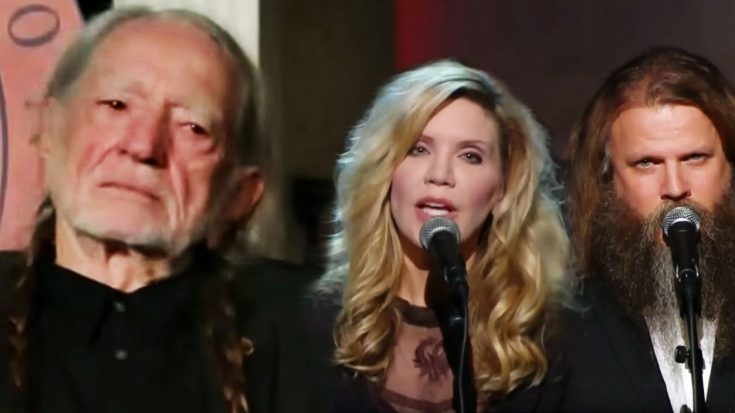 Holding back the floodgates, this country legend was clearly filled with emotion as he watched two close friends and incredible performers pay homage to his astounding legacy in this once-in-a-lifetime performance.

The evening of the Gershwin Prize Awards Ceremony was one that the one and only Willie Nelson will never forget and some of country music’s most iconic people came out in honor of the man that has impacted millions with his treasured music.

Presented by the Library of Congress, November 18th, 2015 will forever remain an incredible day in country music history after honoring Willie Nelson with an award that recognizes a standard of excellence in music not often achieved.

Taking the stage to perform one of Nelson’s most loved hits and a country classic that has stood the test of time, two of his close friends, Alison Krauss and Jamey Johnson bear their souls through an iconic cover of “Seven Spanish Angels”.

Originally, Nelson and Ray Charles issued this classic to radio as a duet in November 1984 as the first radio single from Nelson’s album, Half Nelson. The song was marked as the most successful song Charles ever put out on the country charts.

Unlike any performance of the song you’ve ever heard before, this collaboration is one of the most emotional renditions to ever be brought to the stage.

Watch Jamey and Alison honor Willie Nelson in the video below.