By Miranda Raye on October 18, 2017
Advertisement 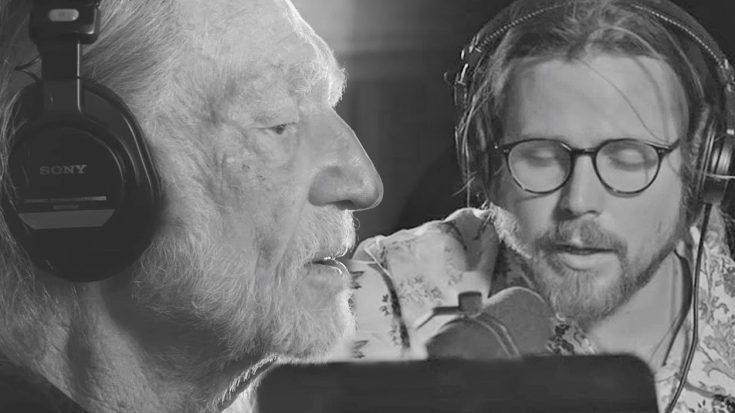 There’s no doubt that musical talent runs in Willie Nelson‘s family. He has passed a love for music on to his children, especially his youngest sons Lukas and Micah.

You’ve likely heard from Lukas and Micah before, as they have collaborated with their father in the past. They have also managed to experience success outside of the country genre, as Micah has been involved with a psych-punk-orchestra named Insects vs. Robots and Lukas serves as the frontman of the rock group Lukas Nelson & Promise of the Real.

While Lukas and Micah have their own projects and careers, they are always on hand to help out their dad whenever he needs them. As you would expect, the trio has recorded a number of songs together over the years. Now, the public is finally getting the chance to hear a large number of those songs.

In September, Willie revealed his plans to release a new album in his archival recording series Willie’s Stash. Titled Willie Nelson and the Boys, the album is a collaboration between Willie, Lukas, and Micah.

All of the material on the album was recorded during the sessions that took place prior to the release of Willie’s 2012 album Heroes. Willie Nelson and the Boys, which is set for release on Friday (October 20), contains a total of 12 tracks. Seven of those 12 tracks are Hank Williams covers, including “I’m So Lonesome I Could Cry,” “Your Cheatin’ Heart,” and “Cold, Cold Heart.”

Another song featured on the album is titled “My Tears Fall.” Written by songwriter Alyssa Miller, the mournful tune includes lyrics such as “I just wail and weep over softly bending strings.”

Willie offered fans the chance to hear the song early when he released a music video for it on Wednesday (October 18). Shot in black and white, the video shows Willie, Lukas, and Micah singing and playing “My Tears Fall” in a studio setting.

Lukas takes the lead on most of the song, but if you were to listen to the video without watching it you would assume it was Willie singing. Their voices are nearly identical!

Since Willie and Lukas’ voices sound so similar, it’s pretty interesting to hear them sing together. It almost sounds as if Willie is singing his own backing vocals!

Go ahead and treat your ears to the sweet sound of Willie, Lukas, and Micah singing “My Tears Fall” by clicking on the video below. What a wealth of talent!